The real climate crisis: A look at Kansas City in 1936

Daniel Fahrenheit invented the thermometer in 1709. So, before that the nature of temperature was a hot or cold day. It is said that on the hottest day in Germany, the temperature might get to 100 degrees, and on the coldest day, it might be zero. It was not that temperature did not exist, but in the entire existence of mankind or the world, there was no quantifiable number to attach to our comfort or discomfort before the short history of the invention of the thermometer.

Enter the Climate Crisis. In the history of human existence, we have only been able to quantify temperature for the last 313 years. Today we have to rely on other means to determine the climate, geology, anthropology, and other sciences, some of which is contradictory. 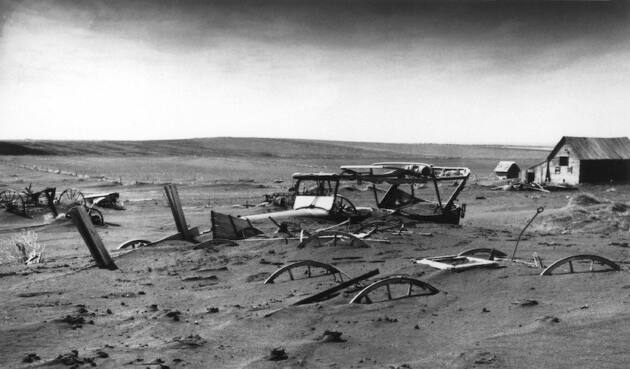 Farm machinery lies buried in dust in Dallas, South Dakota, on May 13, 1936, encapsulating the destruction of the 1930s Dust Bowl across the Great Plains. This photo was taken just weeks before the extreme heat of summer 1936 enveloped large parts of North America. Image credit: U.S. Department of Agriculture, via Wikimedia Commons.

Contrary to public opinion, the warmest years are not the recent ones. We have a few 100-degree days, and it is a crisis? The second warmest summer in the history of Kansas City was 1980, a time I spent working in the field, where I literally consumed a gallon of water a day. Some forty years ago, Kansas City, beginning on July 4, had 17 days in a row where the temperature topped the century mark. On one night, being younger and impervious to danger, I left Westport after midnight to see a bank thermometer reading 98. The interesting thing is the simple fact that this was not Kansas City’s hottest summer. In 1980, only 40% of the private houses in Kansas City were air-conditioned.

During the heat wave of 1936, some 86 years ago, Kansas City endured a real Climate Crisis. There were 53 non-consecutive days of summer temperatures over 100 degrees. There were only 14 in a row, but the temperatures culminated with a temperature of 113 on August 14. According to climatologists, the summer of 1936 remains the most extreme in modern North American history. Note that was long before the current “crisis.”

What made 1936 a true crisis was the singular fact that air conditioning was rare. Some movie theaters had it. Wolferman’s grocery store offered air-conditioned rooms to its patrons, and during that summer, it is estimated that 5000 people succumbed to the heat nationally. My Great Grandfather made a living during this time installing attic fans. That was a crisis. 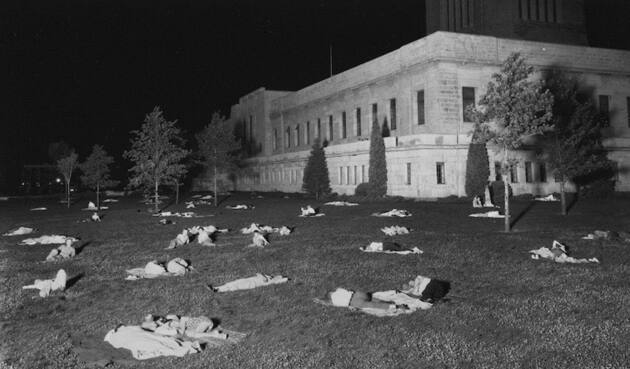 Millions slept outside in the summer of 1936. Residents of Lincoln, Nebraska spend the night on the lawn of the state capital on July 25, 1936. The temperature that night never fell below 91°F, perhaps the warmest night ever recorded anywhere in the United States outside of the desert Southwest. Image credit: Nebraska State Historical Society, via History Nebraska.

Tracking weather in the United States began in 1847, but it wasn’t until 1893 that temperatures began being recorded in Kansas City. In 1972, Kansas City moved its official recording station from the old airport to Kansas City International, but it is telling that in 129 years of keeping track of temperature, the highest temperature should be recorded some 86 years ago, and the second warmest year was recorded some 42 years ago. With this in mind, the concept of Global Warming could be seriously challenged, as the warmest years are distant memories.

Rather than a Climate Crisis, we appear to have a man-made energy crisis. There is little that government can do to change temperatures, meaning that Mother Nature still controls our comfort destinies. It is more a question of being able to supply energy to combat an uncomfortable climate, and at the same time, make it affordable.

Of course, it doesn’t help when we drive halfway across the country in 100-degree heat with our air conditioners on the fritz.

–Bob White is a Kansas City-area resident and history writer for Metro Voice. Read his other stories below. Search his name for more.

READ: Anniversary factoids: What you may not know about Nagasaki and Hiroshima