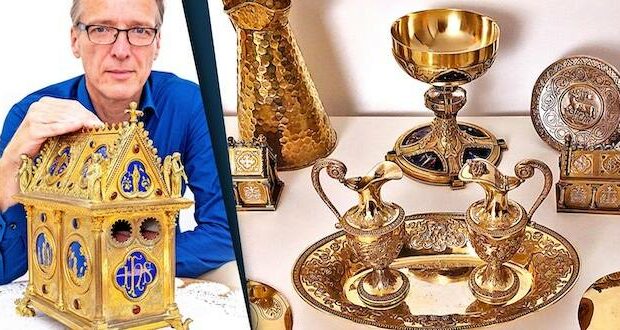 The stolen artefact of the Precious Blood of Christ was returned to Arthur Brand, an art expert who specializes in recovering missing masterpieces

In what seemed like a scene straight out of “Raiders of the Lost Ark,” thieves in France have returned a stolen relic that is said to contain the blood of Christ. The thieves apparently were afraid of keeping such a revered object.

The relic, which contains two vials encased in a gold-plated box, was stolen from Holy Trinity Abbey Church in Fécamp, France, on the night of June 1, stunning Catholics in the region who make an annual pilgrimage to the location. But it since has been returned, thanks to the work of art detective Arthur Brand, known as the “Indiana Jones of the art world,” who received a mysterious email from someone claiming to know where the relic was. If he didn’t help them return the relic to the church, the email said, they would trash it.

“If you can do this for us, you can put this on your legacy,” the email said, according to ArtNet.com, a popular international art website. He asked the emailer to leave the relic on his doorstep in the Netherlands.

“On a Tuesday evening, the doorbell rang at 10:30,” Brand said. “I looked outside. I could see nobody, but I saw a box. I ran downstairs, and there it was. Then I started to believe it was real.”

He assumes the thieves grew “spooked” about holding the relic. Brand, who is Catholic, said it was “as close as one can get to Jesus Christ, the Knights Templar and the Holy Grail.”

I recovered the legendary ‘Blood of Jesus' of Fécamp ('Précieux Sang’), one of the oldest and holiest relics of the Catholic Church. Said to contain blood drops of Jesus Christ, collected in the Holy Grail from his wounds at the Cross. Stolen on June 2nd 2022 in France. AMEN! pic.twitter.com/YhgK8RaUaf

Being in possession of the box, he said, changed his behavior. “I didn’t curse,” he said. “When I went from the shower to my bedroom, I put a towel around my body so I was not naked.”

According to a local website, legend says the church was built “from the trunk of a fig tree in which the blood of Christ had been hidden and miraculously washed ashore on the beach of Fécamp.”

Previous: Former education secretary calls for department to be eliminated
Next: The real climate crisis: A look at Kansas City in 1936