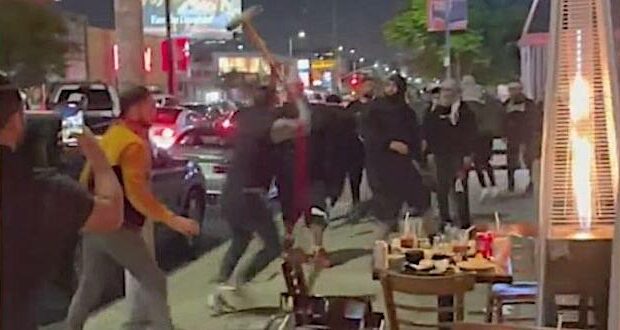 Videos posted to social media show shocking and brutal attacks on Jews across the United States and around the world. Civil liberty advocates are saying Palestinian supporters are bringing the Hamas war against Israel to the streets of American cities.

Over the last 20 years, Palestinians have launched over two-dozen major offenses against Israel, including suicide bombings that killed over 2,30o Israelis (including children on school buses), and rocket attacks. Then there are hundreds of individual attacks on the streets of Israeli cities, including stabbings, car-rammings, the murder of Israeli families caught hiking near their homes.

When Israel responds, in particular to the rocket attacks, pro-Palestinian groups organize protests that most often inflame hatred and violent acts against the world’s Jews.

Americans were disgusted this week as videos captured brazen attacks in broad daylight on the streets of the nation’s largest cities.

In New York, a Jewish man was savagely beaten in a Jewish area while another video caught an attack in Times Square as tourists looked on.

Joseph Borgen, 29, said he was attacked in New York’s Times Square on Thursday night by a group of Arabs and others shouted antisemitic slurs at him. A video of the attack on Borgen, who wore a Jewish kippa, did not instigate the attack and was one of hundreds walking down the street in the middle of the day.

This Jewish man was attacked today in New York City.
Tell me anti Zionism is not antisemitism. I dare you. pic.twitter.com/vzZHSzh93o

“As long as more and more awareness can be brought to this issue, hopefully, some positive change can be made,” he told CNN on Monday.

In Los Angeles, a man is being held on suspicion of assault with a deadly weapon after an antisemitic attack on Jewish diners. Ten cars full of Palestinian supporters rolled up and tried to attack them as they ate outside in Beverly Hills.

Witnesses said a mob of pro-Palestinians attacked a group of Jewish diners at the sushi restaurant. Cell phone video showed a group of men get out of the car and start to attack them while yelling antisemitic slurs.

One of the diners, who is not Jewish, told CBSLA a caravan waving pro-Palestinian flags approached and then began throwing bottles at  the group he was dining with. The man said he is a photographer, and the group was meeting at the restaurant to plan a wedding.

Police are investigating the attack of Jewish patrons at a Los Angeles sushi restaurant as a possible hate crime. A group of people yelling in support of Palestine shouted anti-Semitic remarks at diners before beating one of the men: pic.twitter.com/hC3HxgZkMe

Earlier in the day, a large crowd of pro-Palestinian demonstrators had gathered outside the Israeli consulate in West L.A. The rally was organized by the Palestinian Youth Movement which has chapters on campuses across the nation.

And the problem is growing in Canada as well, where a Jewish man was seen being chased down the street in broad daylight.

In Florida, a pro-Palestinian caravan displayed the words, “Hitler was right.” 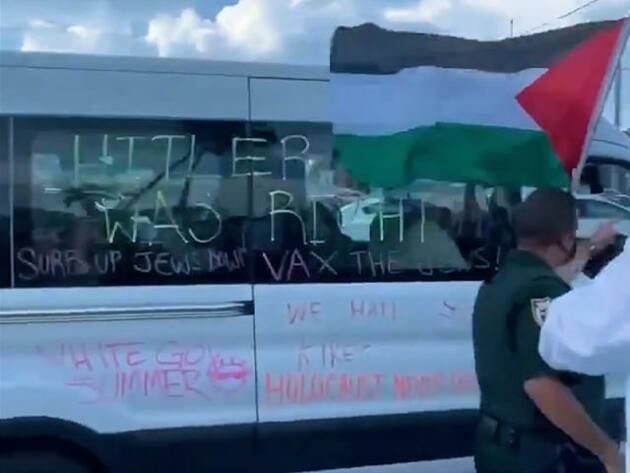 Palestinian protesters around the world have been praising Hitler for slaughtering millions of Jews (Image: Screen capture)

And in Hallandale Beach, Florida, a man yelled antisemitic remarks at a rabbi in front of a synagogue. He later returned so he could dump a bag of human feces in front of the building while shouting, “Free Palestine!” “[Expletive] the Jews!” “Die Jew!”

President Joe Biden was criticized for waiting a full 10 days to address the attacks on Jewish American citizens. He finally issues a statement Monday but for many, it comes too late.

“The recent attacks on the Jewish community are despicable, and they must stop. I condemn this hateful behavior at home and abroad — it’s up to all of us to give hate no safe harbor,” Biden wrote in a Twitter post.

Gilad Erdan, Israel’s ambassador to the United States, tweeted his thanks but wondered if the assailants would be brought to justice quickly.

“The demonization of Israel is clearly sparking this rise in antisemitism. It must be stopped,” Erdan wrote.

“The perpetrators of these attacks deliberately targeted Jewish institutions and individuals for no other reason than their religion, justifying it with age-old antisemitic tropes, exaggerated claims, and inflammatory rhetoric,” the letter said.

The letter was signed by the American Jewish Committee, the Anti-Defamation League, Hadassah, Jewish Federations of North America and the Union of Orthodox Jewish Congregations of America.

Even a ceasefire between Israel and Hamas seems to be holding, Palestinian groups continue to pressure the Biden administration to drop support for Israel.