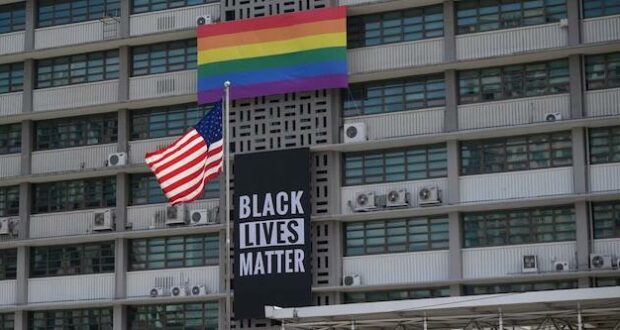 In June of 2020, the U.S. Embassy in South Korea displayed two flags before being told to remove them by the Trump administration. Photo: video screen grab.

The U.S. State Department is being criticized after it issued a memo directing American embassies to fly the Black Lives Matter flag.U.S. Secretary of State Antony Blinken gave the directive to U.S. embassies according to an internal cable reviewed by the news magazine Foreign Policy, as part of the Biden administration’s response to the one-year anniversary of the death of George Floyd.

According to Foreign Policy, The U.S. State Department cable gives chiefs of missions, who head U.S. embassies and consulates worldwide, “blanket written authorization” to display BLM flags and banners as “appropriate in light of local conditions.”

The State Department memo was exposed by Human Events which reported that embassy staff should also reference Black Lives Matter in their speeches about the Floyd death. The move was roundly criticized for politicizing the efforts of foreign State Department staff with a domestic issue. The policy comes as embassies were also directed to celebrate Gay Pride month fly the pride rainbow flag.

“What the State Department doesn’t appear to understand, or maybe this is the whole point, is that the existence of BLM is a national humiliation to the United States,” stated Primetime Fox News host Tucker Carlson.

INSANITY. A State Department memo is reportedly encouraging US Embassies to support Black Lives Matter and fly BLM flags. They refused to clarify its position when asked by Tucker Carlson Tonight. pic.twitter.com/sWeyFaooZz

The memo says that US Embassies can fly a BLM flag and the diplomat should reference Black Lives Matter in their speeches,” the popular television host said.

“Should American ambassadors come out against the nuclear family as BLM has for socialism? As BLM has for race hatred? As BLM does every day!” Carlson continued.

The self-described Marxist Black Lives Matter movement fueled much of the protests last year in which thousands of businesses were looted and burned and entire sections of cities left in ashes.  Hundreds died, including innocent black store owners and police officers in protests that spread to cities across the nation.

Carlson said the existence of BLM is a “national humiliation,” acknowledging that “the rest of the world is watching.” He went on to say, “Of course [they’re watching], we’re America. They pay close attention to what we do.” The Fox News played a clip of Chinese officials explaining that the Black Lives Matter movement “shows the United States is in a terrible place.”

Tucker welcomed National Review writer Deroy Murdoch, who shared the same views. Both Tucker and Murdoch talked about what it might look like if groups like QAnon or the National Rifle Association flew flags at American foreign embassies. “Fly the QAnon army flag,” Carlson joked.

“I don’t equate those peaceful groups with Black Lives Matter, which has incredible recent violent history. But imagine what people on the left would respond if you had NRA flags flying over the US Embassy in Paris, the US Embassy in London, I don’t think (they’d) be very happy,” Murdoch mused.