Home / Entertainment / Will ‘Rings of Power’ TV series be faithful to Tolkien’s Christianity? 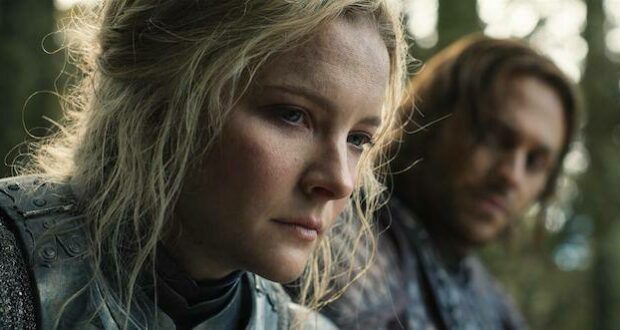 Morfydd Clark as a young Galadriel.

Will ‘Rings of Power’ TV series be faithful to Tolkien’s Christianity?

As the Sept. 2 release date of Amazon Prime’s controversial series “Rings of Power” nears, fan anticipation is building immensely. The show is meant to be a prequel to J.R.R. Tolkien’s “The Hobbit” and “The Lord of the Rings”, set during the fictional Second Age that resulted in Sauron’s rise to power.

Fans of Tolkien’s original work and the early 2000s movie adaptations by Peter Jackson fear that the show will be a soulless cash-grab that fails to capture the spirit of Middle Earth properly. The creators’ initial comments that they wanted the show to be “the new Game of Thrones” made many fear that the show would feature explicit sex scenes — something the showrunners have since denied. An emphasis on diverse casting, for diversity’s sake, created early backlash on social media.

For religious fans, opinions of the new show will depend on how faithfully it captures Tolkien’s Christianity.

Tolkien’s explicitly Christian imagination is at the heart of “The Lord of the Rings” story, so the involvement of creators who largely disagree with that worldview has caused preliminary worry — particularly since the show is using original material that doesn’t just follow the books.

Joseph Pearce, author of “The Hidden Meaning of Lord of the Rings” and director of book publishing at The Augustine Institute, noted the strong and public nature of Tolkien’s faith in an exclusive interview with ReligionUnplugged.com.

“Tolkien said that ‘The Lord of the Rings’ is, of course, a fundamentally religious and Catholic work,” Pearce said. “Elsewhere he said that the fact that he was a Christian and in fact a Roman Catholic was the most important connection between his role as author and the nature of the work, adding that the Catholic dimension can be deduced from the stories.”

READ: Tolkien’s fellowship behind the fantasy

Famous philosopher and Christian apologist Peter Kreeft, speaking at Biola University, said, “You’ll notice that there’s no overt religion in ‘The Lord of the Rings.’ There’s no churches. There’s no temples. There’s no prayers. Why is that? Well, when Frodo and Sam enter the elf forest of Lothlórien, Sam says, ‘There’s strong magic here all over the place, but you can’t see anybody working it.’ Well, that’s not just true of Lothlórien, that’s true of the whole ‘Lord of the Rings.’ And for a Christian, that’s true of the world. The presence of God is everywhere — so ubiquitous that you don’t notice it, as a fish doesn’t notice the ocean. In fact, I would go so far as to say that the single most important character in ‘The Lord of the Rings’ is God.” 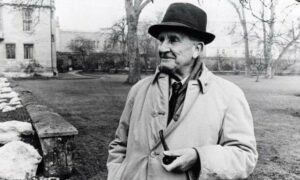 JRR Tolkien was in his 60s when Lord of the Rings was first published.

The Rev. Fleming Rutledge, author of “Battle For Middle Earth: Tolkien’s Divine Design in ‘The Lord of the Rings’”, emphasized this point in an exclusive interview with ReligionUnplugged.com.

The most obvious place this is referenced is in Gandalf’s speech to Frodo in “The Fellowship of the Ring” explaining why it is right not to kill the despicable Gollum.

Frodo: It’s a pity Bilbo didn’t kill Gollum when he had the chance.

Gandalf: Pity? It was pity that stayed Bilbo’s hand. Many that live deserve death. Some that die deserve life. Can you give it to them, Frodo? Do not be too eager to deal out death in judgment. Even the very wise cannot see all ends. My heart tells me that Gollum has some part to play in it, for good or evil, before this is over. The pity of Bilbo may rule the fate of many.

Frodo: I wish the Ring had never come to me. I wish none of this had happened.

Gandalf: So do all who live to see such times, but that is not for them to decide. All we have to decide is what to do with the time that is given to us. There are other forces at work in this world, Frodo, besides that of evil. Bilbo was meant to find the Ring, in which case you were also meant to have it. And that is an encouraging thought.

Rutledge calls what happens in the book’s climax “one of the greatest written endings in fiction.”

Frodo, overcome by the ring’s corrupting influence, says he can’t destroy it and threatens to leave Mount Doom with his mission incomplete. Instead, Gollum is the one to destroy the ring — destroying himself in the process.

“Gollum completes the task, but the task is strategized not by Gollum, and not by Frodo, and not even by Gandalf,” Kreeft said. “It’s strategized by God. The God behind this invisible magic of divine providence is the real hero of ‘The Lord of the Rings.’ But he’s an anonymous God; he’s a humble God; he’s a Christlike God. He’s not like Zeus or Thor.”

The Bible’s idea of sin also plays a prominent role in the narrative and lives of characters in Tolkien’s work.

Instead, in the same way Christians understand that sin is universal but can be forgiven, the characters of “Lord of the Rings” both have the propensity for good and evil within them.

For religious people, these elements are distinctly Christian. Losing them would be to lose what makes “Lord of the Rings” as powerful as it is.

Some are less than optimistic about whether the show will capture these elements, given it is done by Amazon.

“It won’t do it,” Pearce said. “It’s like trying to reason with Sauron. It’s a waste of time.”

However, others think fear over “Rings of Power” is misplaced. Stephen Colbert, who’s both a Catholic and a Tolkien superfan, is excited about the show.

“Of course it can be challenging to have something you love as much as ‘Lord of the Rings’ and that entire world taken on by someone new,” Colbert said at this year’s San Diego Comic Con. “I’ve gotten to meet showrunners Jaden Payne and Patrick McKay, and I am struck by their sincerity and love of this world.”

It remains to be seen whether the show will be faithful to the religion inherent in Tolkien’s work. If it isn’t, it may at least excite a new generation to read the original works and explore the deep theology bubbling beneath the surface.

“People can read ‘The Lord of the Rings’ just for fun or to get a very powerful experience of good and evil — and to experience from the inside some of the great mythology of the world and also derive some philosophy of life from it,” Rutledge said. “I think there’s some food for thought for everyone in it. You don’t have to be a theological nerd to enjoy the book, but for those who are open to theological nuance, it’s a hundred times richer.”

Joseph Holmes is an award-nominated filmmaker and culture critic living in New York City. He is co-host of the podcast “The Overthinkers” and its companion website theoverthinkersjournal.com, where he discusses art, culture and faith with his fellow overthinkers.

Previous: Pro-life community responds to Walmart decision to fund abortions
Next: How Christianity modeled care for the sick in the Roman world