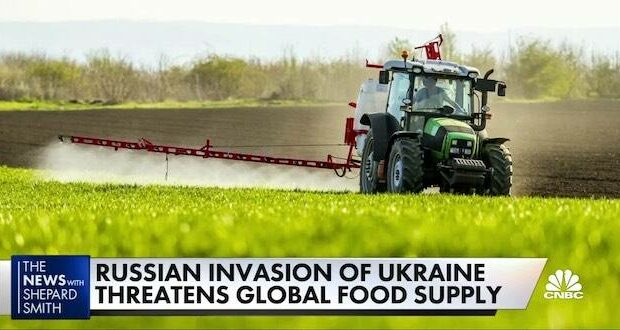 The world will soon experience a global food crisis due to Russia’s invasion of Ukraine. The dire warning was issued by Ukraine President Volodymyr Zelensky as he addressed by video graduates of a specialized program in Singapore.

“The world will face an acute and severe food crisis and famine,” he told the 575 delegates from 40 countries at the dialogue, according to CNBC. “The food [crisis] touches Asia, Europe, and Africa. Russia has blocked the Black Sea. Prices are rising. Russia is violating international law,” he said in a question-and-answer session.

The United Nations’ Food and Agriculture Organization and World Food Program recently warned that acute food insecurity is likely to “deteriorate further” in 20 countries. The report said the Ukraine conflict was one of the reasons contributing to the food crisis.

Ukraine and Russia are two of the largest exporters of some of the biggest staple foods in the world. Combined, they both account for 27 percent of the world’s wheat trade and 53 percent of sunflower oil and seed trade.

Wheat is estimated to provide 15 percent of the world’s calories, while vegetable oil, of which sunflower oil is one of the main oils consumed throughout the world, provides another 10 percent of the calories.

Disrupting Ukraine’s exports of these two commodities has pushed up prices. There were around 22 million tons of grains waiting to be exported from Ukraine as of late May. As Russia blockades Ukraine’s Black Sea ports, the commodities have remained unsold, stuck in warehouses.

Before the invasion, Ukraine exported 4.5 million tons of agricultural produce per month through its ports. But with Russia blocking the Black Sea corridor, agricultural commodities can only be transported via less efficient land routes, if at all.

In his virtual speech, Zelensky accused Moscow of trying to discard “all historical achievements of humankind,” especially the system of international law. He called on countries to “break the ability” of Russia to block seas and suppress freedom of navigation.

“If there had been no international law, and the big fish ate the small fish and the small fish ate shrimps, we would not have existed,” the Ukrainian president said, invoking the words of Singapore founder Lee Kuan Yew.

“We are in a race against time to help farmers in the most affected countries, including by rapidly increasing potential food production and boosting their resilience in the face of challenges,” the U.N. report states.

Previous: Two non-profits will host Community Walk / Passport to Health
Next: Yes, young adult, you can fly the American flag and be proud