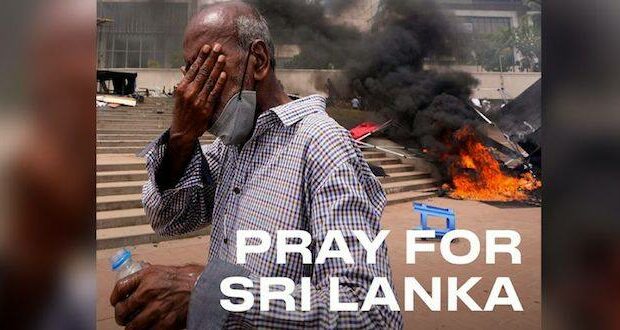 The world could be at the initial stages of a massive food crisis, say economists. Shortages of fertilizer for farmers, the inability of Ukraine to export crops and record fuel prices are what’s driving concern. And nowhere more than Sri Lanka.

The island nation off the coast of India is seemingly falling apart after government policies have led to clashes across the nation over the last two months. Dozens have been killed during protests that have seen millions take to the streets against food and fuel shortages. Included in the deaths are several elected officials, including a parliament member. The government has responded by killing protesters.

The situation has united some ethnic factions that have been at odds for decades.

Hundreds continue to be injured each week as they target the property of political figures including Mahinda Rajapaksa, who has stepped down as prime minister. As a result, Sri Lanka now remains in a current state of lockdown.

More alarmingly, however, is that the government has limited the country’s population of , limiting civilians to one meal a day. Power cuts continue to take place across the island and very limited fuel is available.

“While in a discussion with the former president and two members of parliament I was made aware how desperate the food situation is in Sri Lanka,” writes the superintendent of the Assemblies of God in Sri Lanka. “Three times during the conversation the former president mentioned that there are hundreds of thousands of Sri Lankans just living off a single meal currently.”
A nationwide curfew is now in place and is preventing people from earning a living. The Sri Lankan government is only allowing residents to leave their homes for food and other necessities.

The president has brought back a former prime minister in a last-minute attempt to return some modicum of stability to the country. This, while the most recent Prime Minister and several members of parliament are being held in secure locations with some on military installations. The Sri Lanka High Court has turned down their request to leave the country until there is a complete investigation into government forces firing on civilians.
The Assemblies of God is asking Christians to pray for those suffering from hunger, increased violence, and a lack of resources.

AG World Missions is raising funds to help assist Sri Lankans endure the food shortages. The funds will aid in the distribution of food to those in need while serving as an evangelistic effort for the local church, reaching church members as well as community members. The goal is for every pack that is distributed to an identified church member, a second pack is provided to a community member, extending the hand and heart of Jesus to those in need.

To give to the Sri Lanka relief and outreach effort, click here.

Previous: We can know what’s false but censorship isn’t the answser
Next: Republicans hold strong lead in voter turnout during primary elections