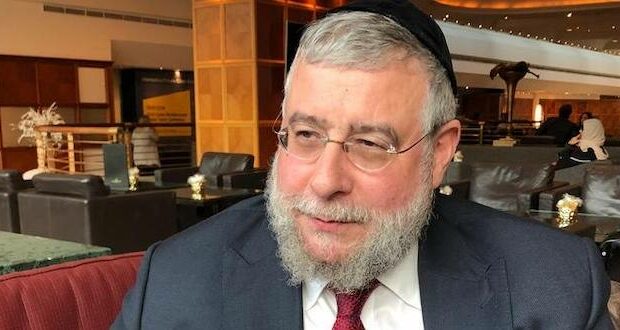 In a startling revelation, Moscow’s chief chief rabbi has fled Russia due to threats over his vocal and public opposition to the brutal invasion of Ukraine.

His daughter-in-law, a New York-based journalist, tweeted the news. “Can finally share that my in-laws, Moscow Chief Rabbi @PinchasRabbi & Rebbetzin Dara Goldschmidt, have been put under pressure by authorities to publicly support the ‘special operation’ in Ukraine — and refused,” tweeted Avital Chizhik-Goldschmidt, who is married to a son of the rabbi.

“They flew to Hungary two weeks after the Russian invasion of Ukraine,” she said. “They are now in exile from the community they loved, built & raised their children in, over 33 years.”

Although “grateful our parents are safe,” she added, “the pain & fear in our family the last few months is beyond words.”

Goldschmidt arrived with his wife in Israel before Passover, having spent weeks visiting and fundraising for Jewish communities in countries bordering Ukraine that had taken in Ukrainian refugees fleeing Russian forces. He left Russia after saying his elderly father is ill.

The rabbi spoke about the war last week at an annual meeting of the Conference of European Rabbis, an organization which he leads.

“We have to pray for peace and for the end of this terrible war; we have to pray that this war will end soon and not escalate into a nuclear conflict that can destroy humanity,” he said in Munich. According to The Jerusalem Post, he was protected by German-paid bodyguards while there due to his having received death threats.

Officials at the meeting confirmed his daughter-in-law’s statement, Ynet reported, saying that Goldschmidt had come under heavy pressure from Moscow to support the war. Members of the Russian Jewish community said he was afraid to return because he had helped the refugees, the report added.

Chizhik-Goldschmidt pointed to the support her father-in-law still enjoys back home even through his absence, relating that he had just been re-elected to head the Moscow Jewish community.