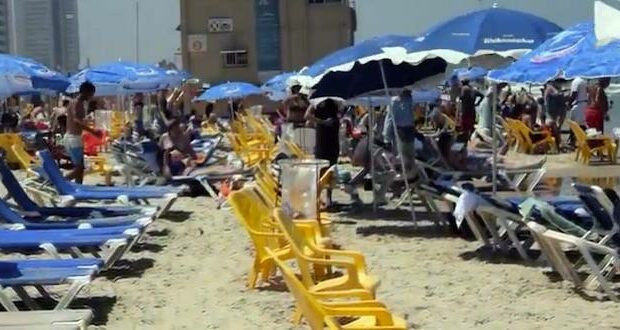 Israeli beaches are filling up with citizens and tourists.

Israel hit a milestone in the last week and recording zero Covid deaths for the first time in over a year.

At the height of the pandemic in January, dozens of people were dying daily due to COVID.  Since the beginning of June there were just six deaths and none last week, the Jerusalem Post reported.

Cases this week are on the uptick as Israelis return home with the new Covid Delta variant. According to a statement from the Prime Minister’s office, Israelis returning from certain countries are not adhering to the quarantine guidelines for travelers returning home.

Prime Minister Naftali Bennett and Health Minister Nitzan Horowitz met on Sunday evening and agreed to appoint 250 police officers to the task of enforcing isolation/quarantine requirements for Israelis returning from abroad, establish a testing complex at Ben Gurion airport and increase the number of checkpoints at the airport.

Israelis currently are not allowed to travel to Argentina, Russia, India, South Africa, Mexico and Brazil, without special permission, and must sign an affidavit saying they won’t travel to those countries once they are outside of Israel.

TOUR: Travel to Israel with Metro Voice this Fall and in the Spring

Israel is noted for having the fastest vaccination rate in the entire world. This while the U.S. is scheduled to miss the 70% vaccination goal set by President Joe Biden.

Interior Minister Ayelet Shaked, announced on Sunday that foreign travelers who are vaccinated as well as their children up to age six that are not vaccinated will be allowed into the country starting July 1.

Israel opened up to a limited number of vaccinated tourists in groups at the end of May, without any adverse effects and invited another 1000 tourists in groups to visit before the end of June. Currently, travelers must show proof of vaccination or that they have the antibodies showing they’ve already had the virus. Officials say that could change in the coming months as more Israelis are vaccinated, paving the way for unvaccinated individuals and tours to visit the country.

Meanwhile, the Palestinian Authority rejected a deal, which it initially accepted, to receive more than a million Pfizer vaccines from Israel immediately in exchange for its own shipment that is set to arrive in several months. The vaccines expire July 1 and Israel did not want to see them wasted.

The PA Health Minister said the doses “fall short of meeting the technical criteria.”  But talks are supposed to continue between the PA and Israel to renegotiate the deal.

On Monday, Israel’s Defense Minister Benny Gantz said it was in the “prime medical, political and security interest” of Israel for the Palestinians to be vaccinated.

“I welcome the Palestinian Authority’s announcement that we will get back to talking about actualizing the agreement between the PA and Pfizer as far as vaccine supply from Israel is concerned. I would like to stress that we are committed to the health of our neighbors, and I am confident that we will find a solution to all-around benefit,” Gantz said during a meeting with his Blue and White faction.

The PA was roundly criticized around the world by turning down the vaccines from Israel, which had also volunteered to administer the doses to Arabs in the PA-controlled areas.