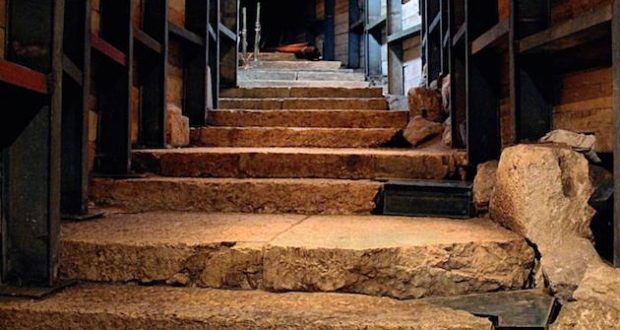 Jerusalem street on which Jesus walked, and built by Pontius Pilate, now open to public

Pontius Pilate has gone down in history for his role in the crucifixion of Jesus. However, archaeologists recently found that he also invested time and money in building the infrastructure of Jerusalem including a street used by Jesus.

Archaeologists tunneling beneath a Palestinian neighborhood just south of Jerusalem’s walls uncovered a monumental stepped street that led to the foot of the Temple Mount, the sacred platform that once held the Jewish Temple and now is home to the Muslim Dome of the Rock.

The impressive walkway stretched more than a third of a mile, was 26 feet wide and required some ten thousand tons of limestone slabs. “We think it was a single project built at one time,” said Joe Uziel, the Israel Antiquities Authority archaeologist in charge of the effort. Uziel and his colleagues recently published their findings in Tel Aviv: Journal of the Institute of Archaeology.

The street is now open to the public who can climb and walk its ancient steps. The site will be included in the June 2020 tour of the Holy Land that Metro Voice is sponsoring.

Historians long assumed that the Roman-appointed King Herod the Great, who died around 4 B.C., was responsible for most of the great construction efforts that transformed ancient Jerusalem into a major pilgrimage and tourist center. But analysis of more than 100 coins found beneath the stepped street point to the start and completion of the effort under Pilate, who ruled for about a decade starting in A.D. 26 or 27

The latest coins discovered beneath the paving stones date to around A.D. 31. The most common Jerusalem coins from the first century were minted after 40, “so not having them beneath the street means the street was built before their appearance, in other words only in the time of Pilate,” said Donald Ariel, a coin expert with the Israel Antiquities Authority.

Tel Aviv University archaeologist Nahshon Szanton, the lead author of the study, speculates that Pilate’s construction of the street “may have been to appease the residents of Jerusalem,” as well as to “aggrandize his name through major building projects.” In A.D. 70 the street was buried under rubble following a revolt between Jewish groups that led to the Roman destruction of the city. Many of its slabs were subsequently reused for later projects.

If you are interested in joining Metro Voice publishers Dwight and Anita Widaman on a trip to the Holy Land, call them at 816-524-4522. Two trips are planned for 2020 with the first departing June 20 and returning July 1 and a second tour for young people combining the Bible and adventure departing July 11.