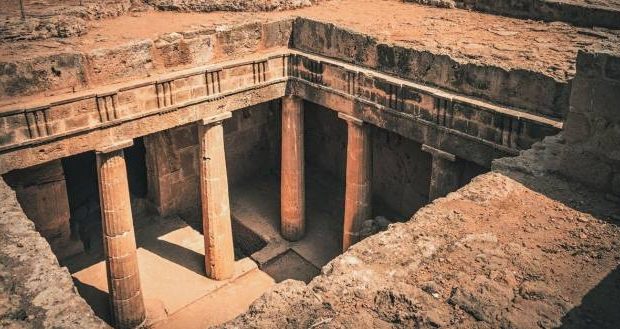 It was an exciting year for archaeological discoveries in Israel. The Holy Land has more digs taking place than any place on earth. One reason is the building boom taking place that is uncovering historical sites at an unprecedented rate. When a new construction site begins, Israeli contractors and developers are required by law to have the site assessed by officials from Israel’s national archaeology ministry. If something is discovered, no matter how minute, the construction comes to a halt until it can be studied.

These wonderful discoveries continue to connect the modern day land to the ancient story of Israel’s history and the Jewish and Christian peoples. Science is proving the validity of the Biblical story!

Archaeology continues to confirm the details of the Bible in remarkable ways!  This is what makes archaeology so very exciting… you never know what will be discovered next that links us to something in the Bible.

Each year, Gordon Govier compiles a list for Christianity Today of the top 10 archaeological discoveries of the year. This year Govier offered another impressive list.

Govier serves as the editor of ARTIFAX magazine and as executive producer of The Book & The Spade radio program and podcast. Metro Voice readers will have an opportunity to see many exciting discoveries and live archaeological sites during a 11 Day Israel tour in September of 2019. It will be a fantastic tour covering new sites.

With permission and full credit to Christianity Today as well as to The Book & the Spade, here is his “Top 10” list. 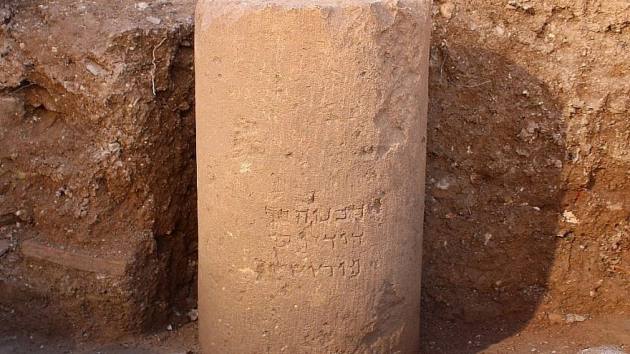 Archeologists uncovered an inscription on a pillar in an excavation of an ancient potter’s village, near the western edge of the modern city of Jerusalem earlier this year. The inscription includes the word, “Yerushalayim,” the name of Jerusalem written in Hebrew, and was dated to 100 B.C.

The potter’s village no doubt served the many pilgrims who were on their way to the Temple in Jerusalem, just a few miles to the east. It calls to mind the potter’s field in Matthew 27:7 that was bought by the priests with the money Judas took for betraying Jesus and then returned. 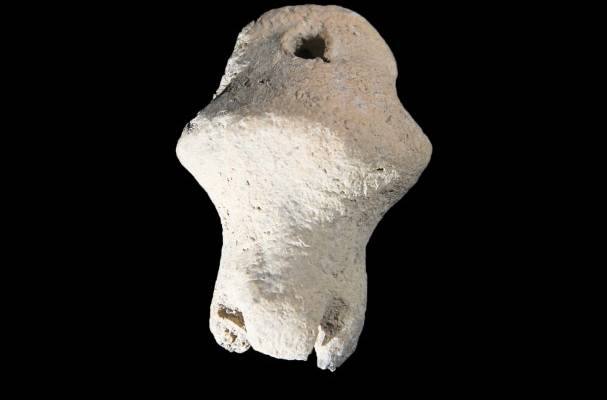 Tel Shiloh, the site where the Jewish tabernacle and the Holy Ark were located between the Israelite conquest and the building of the Temple in Jerusalem, yielded an unusual clay pomegranate in an excavation this year. In the Bible the pomegranate is a common temple decoration (1 Kings 7:18; 2 Kings 25:17), and small pomegranate decorations hung from hems of the robes of the priests (Ex. 28:33).

8) Esarhaddon inscriptions found at the shrine of Jonah 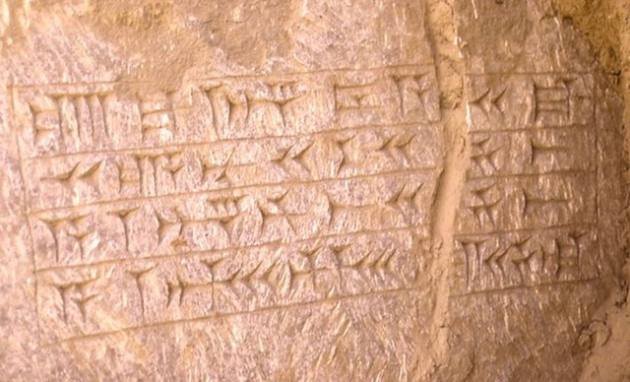 In 2014 ISIS blew up the shrine of the tomb of the prophet Jonah in the Iraqi city of Mosul. The now-destroyed Muslim shrine had been situated on a mound, where archaeologists soon found the remains of a palace of the Assyrian King Esarhaddon. The king’s name is referenced in inscriptions discovered in tunnels ISIS dug into the mound, as the group searched for artifacts to sell on the antiquities market. Today, archaeologists are using these tunnels to investigate the temple remains.

The Old Testament references Esarhaddon when discussing the assassination of his father Sennacherib (1 Kings 19:36–37; Isa. 37:37–38), who was the king who ravaged much of Hezekiah’s kingdom of Judah and unsuccessfully besieged Jerusalem. Esarhaddon himself reigned from 681–669 B.C. Information archaeologists discover in the remains of his palace will tell us more about the latter days of the kingdom of Assyria than of the time of Jonah, who lived almost a century earlier and whose actual final resting place is unknown. 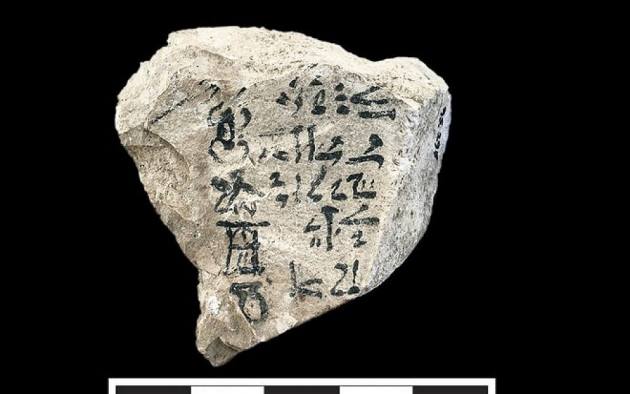 Biblical history intersects multiple times with the history of writing, as illustrated by an inscribed piece of limestone discovered in 1995 in a tomb along the west bank of the Nile at Luxor. University of British Columbia Egyptologist Thomas Schneider has deciphered the letters and announced this year that it’s an abecedary, a very early version of the Semitic alphabet in ABC order.

The excavated tomb dates back to 1450 B.C., the time of Moses, according to the biblical chronology. It suggests that if “Moses wrote down everything the Lord had said” (Ex. 24:4), he wasn’t the only one writing in a Semitic script in Egypt at that time. 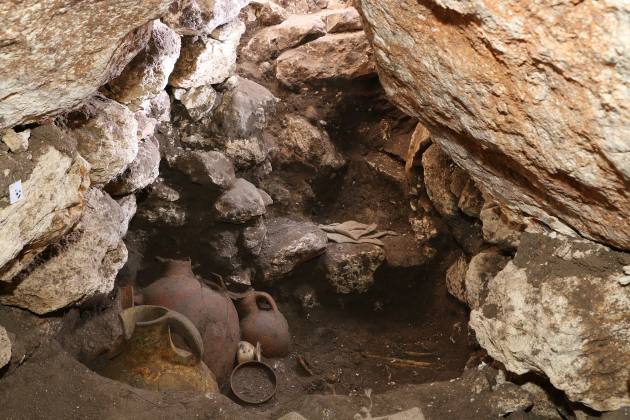 A Canaanite tomb excavated at Tel Megiddo in 2016 and announced earlier this year has revealed new information about the inhabitants of one of the most famous and important ancient cities in the region. At the original announcement last March, archaeologists marveled that the 3,700-year-old tomb was still intact and unlooted, yielding the remains of a man, a woman, and a child, all adorned with gold and silver jewelry.

From the tomb, archaeologists expected to learn much more about the Canaanite culture that existed in Israel during the time of the patriarchs. And, indeed, just a few weeks ago it was reported that residue in one of the jugs from the tomb was discovered to be vanilla, which was not thought to have been known nor used in that part of the ancient world at that time. The finding illustrates the robust spice trade of the ancient world.

5) Beka weight from the Temple Mount 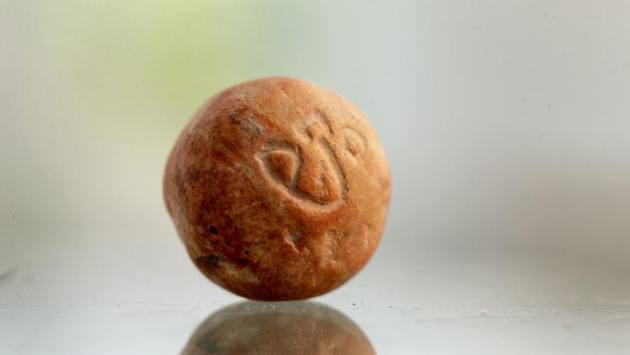 An extra-careful processing of archaeologically recovered dirt called the wet sifting process has resulted in many more tiny but significant discoveries in recent years, such as the beka weight announced recently. As explained in Exodus 38:26, the beka was used to measure the half shekel temple tax due from each member of the community.

This tiny weight (5.5 grams or 0.2 ounces) was inscribed with the Hebrew letters spelling beka and was discovered in excavations near Robinson’s arch, at the southwestern corner of the Temple Mount. It is believed to have been used to weigh the temple tax during the First Temple period. 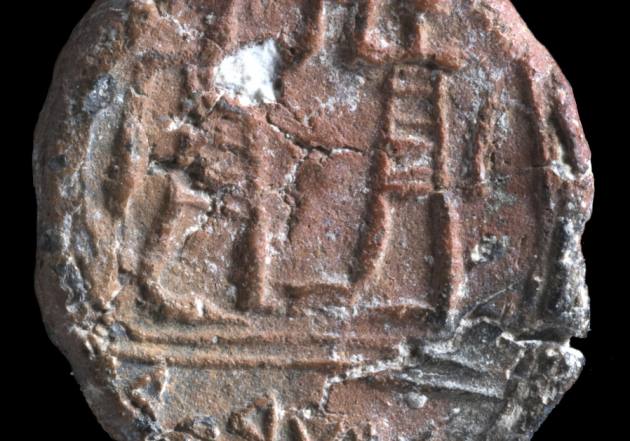 In 2017, while cleaning out dust between stones in an ancient Jerusalem wall, archaeologists discovered a biblical title heretofore unattested by archaeology, “governor of the city.” As the dust was carefully sifted, a clay seal impression was recovered. The image on the clay depicted two figures facing each other and the inscription.

3) Signature of Isaiah the prophet in seal impression 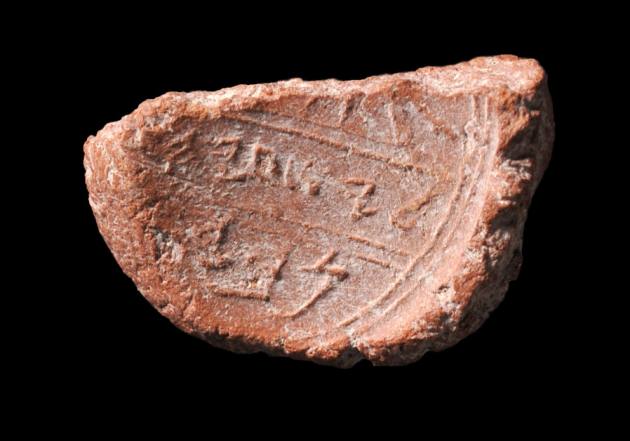 Another seal impression surfaced in 2018, this one with the actual name of one of the most important Old Testament prophets, Isaiah. It nearly says “Isaiah the prophet,” but because there’s a letter missing at the end, it’s unclear if it actually refers to a personal name.

One piece of evidence that suggests that the seal impression refers to the biblical prophet is a small piece of clay that archeologists recovered in an area near Jerusalem’s Temple Mount. This similar seal impression, which was first found in 2015, says “of King Hezekiah of Judah.” King Hezekiah and the prophet Isaiah are mentioned in the same verse 17 times in the Bible. 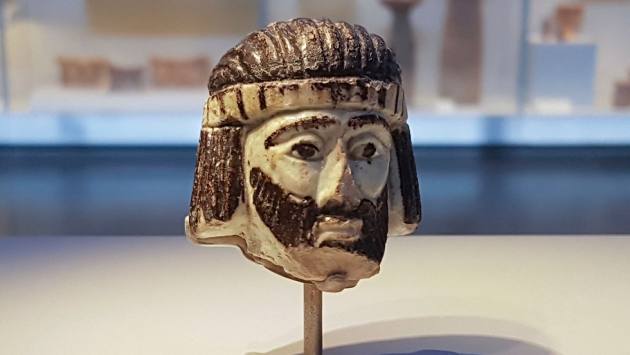 This discovery might have shot to the top of the list if there was some way of identifying who this statue head depicts. But there’s no name or inscription. The best clue to his identity is the band around his head, suggesting a crown.

This tiny two-inch sculpture was found in 2017 at Abel Beth-Maacah, a site near the border between Israel and Lebanon, but caught the public’s attention when it was placed on display at the Israel Museum last summer. It dates to the 9th century B.C., so it could depict a king of the northern kingdom Israel, such as Ahab or Jehu. But just as easily it could be King Hazael of Damascus or King Ithobaal of Tyre, the father of Jezebel. 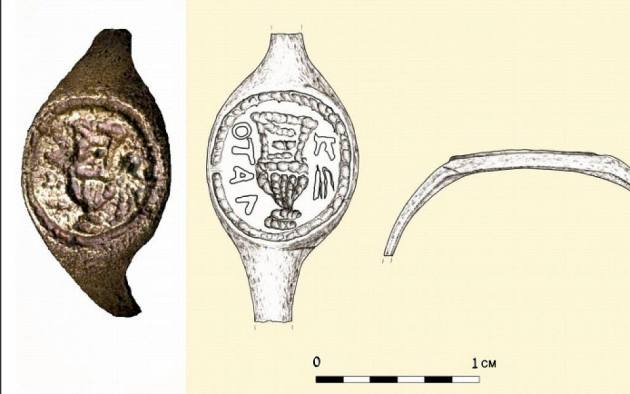 The name of Pontius Pilate, the Roman procurator who interrogated Jesus and then ordered him crucified, has turned up for the second time in the archaeological record. The first time his name and title were found engraved in a stone discovered in 1961 in secondary use at Caesarea Maritima. Just a few weeks ago, scientists announced that a seal ring excavated in the late 1960s at Herodium, a desert palace just outside of Bethlehem, also carried the inscription “of Pilates.”

The inscription on the badly corroded ring was finally read using advanced photographic techniques. The copper alloy ring was probably not fancy enough to have actually been worn by Pilate. It was more likely worn by someone who was authorized to act on Pilate’s authority and who would use the seal to create official communications.

These discoveries, relatively insignificant individually, join with many other discoveries over the decades to give us a great deal of confidence in the historical details contained in the Bible.