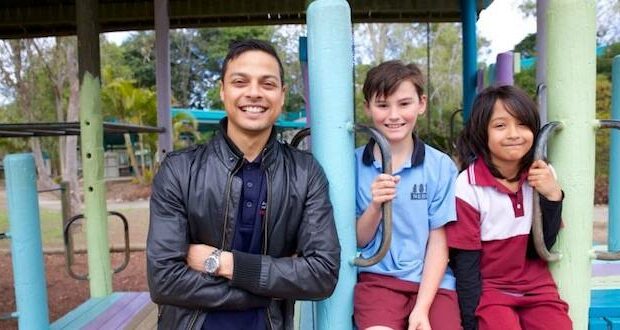 An Australian school chaplain with students.

Australia may soon lose a beloved component of its public schools – chaplains.

An institution in Australian schools, the national school chaplaincy program provided a trusted, caring and affirming presence in school with time and training to listen and support appropriately, as well as running programs to develop self-esteem, grow peer support, deal with grief and loss and build personal resilience. It provided students with Christian support in an age where most students have little to no Christian influence.

The national program, which was begun by the country’s then Prime Minister, John Howard, in 2006, was a pastoral program that has helped many students across the country. “Chappies” as they are affectionately known, are now in over 3000 school communities around Australia.

The non-political and non-denominational program helped students navigate the many pressures of growing up. It served all students including those of no faith or a faith other than Christianity, something that even secular Australians applauded.

“Labor’s change will dump the compulsory religious requirement for the program. Thousands of schools will be vulnerable to pressure from radical activists demanding that they dump their chaplains in favour of a secular alternative.

“As our Shadow Education Minister Alan Tudge said today, ‘Of all the issues in schools to deal with, changing the Schools Chaplains Program is surely not the priority.’ I know many of the chaplains in my local schools. They are big-hearted, caring people who love and serve their communities. They do so because they are motivated by their Christian faith and a desire to see our kids prosper.”

According to The Guardian, the new Australian education minister, Jason Clare, confirmed the Albanese government intends to give schools a choice of whether to hire a religious or secular pastoral care worker through the $60m-a-year program.

Schools are currently required to hire chaplains with an affiliation to a recognized religion. Although the program bans proselytizing, secular groups, the teachers union and whistleblowers have said it gives religion a foothold in schools to recruit students to church groups and speak about religion, if asked.

Supporters of the chaplains say the schools and society have much more to be worried about, rather than a student attending a youth group.

“We are trying to give people a voice, so they can speak into why they think chaplaincy should be retained in schools,” said School Chaplaincy chief executive Peter James for the Australian Capital Territory (ACT). The group has launched a “Save Our School Chaplains” campaign.

“People really care passionately about chaplaincy and they keep expressing their views. We have been blown away by how strong the support is in the ACT.

“We have former students saying they would not have made it through school without my chaplain.”

The campaign was launched this month and an increasing amount of pro-chaplaincy comments are coming in. “At least once a week, and sometimes twice a week, we bundle up the comments people make and we send them to all the politicians in the ACT,” said James, referring to state and federal members.

“Labor seems more interested in satisfying left-wing activists,” Hastie continued. “This move is a betrayal of Australia’s school chaplains, and the many kids that they help and support. We are less than month into the Albanese Labor government. These early calls signal a radical shift to the left.”

Bruce McCourt is a former high school principal. He spoke to local media Canberra in 2019 saying he supported the program.

“Sacking chaplains in schools makes no practical sense,” he stated.

Previous: Will a second Jesus People movement spring from this weekend’s Cotton Bowl event?
Next: Perfect summer reading: ‘The Adventures of Tom Sawyer’