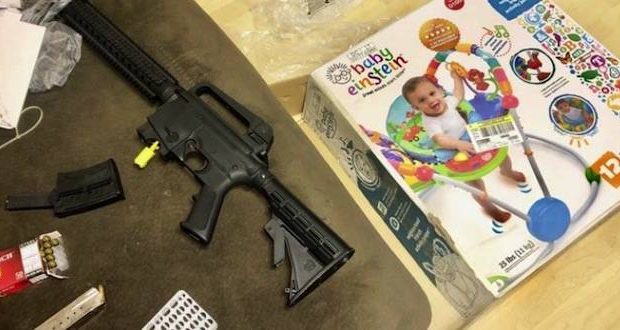 It was a tragedy waiting to happen when a man opened a baby shower gift and discovered a loaded rifle stashed in it.

Veronica Alvarez-Rodriguez told the Northwest Florida Daily News she was shocked after the Goodwill bargain Baby Einstein bouncer box was opened up by friend’s husband to reveal a loaded semi-automatic rife. She said that at the store, the box appeared to be unopened and in great condition and, at less than $10 was a steal.

When the father-to-be opened the gift on Sunday, it turned out it contained a Mossberg 715T semi-automatic rifle.

Alvarez-Rodriguez posted photos of the unexpected gift on social media.

“It was like the perfect gift for the baby shower,” Alvarez-Rodriguez said speaking of the baby bouncer she thought she had purchased.

The father-to-be who opened the gift thought so as well.

“He shouted, ‘You guys got me a gun!'” Alvarez-Rodriguez quoted the man saying when he saw the rifle.

While some of the guests, many of whom are military families, laughed at the baby shower rifle, Alvarez-Rodriguez said she and her husband were shocked. They immediately called the Crestview Police Department.

Arriving at the home, officers checked the identity of each guest making sure they did not have outstanding warrants and were not convicted felons, police spokesman Maj. Andrew Schneider said.

The next day the new gun owner was asked by the police to turn it over though police did not indicate if it would be returned.

“Goodwill has the best treasures for $9.99,” Alvarez-Rodriguez said.

The entire incident was a “total shock for us,” she told a local TV station. “…just glad it came into safe hands with all of our husbands being military.”
–Wire services
baby bouncer discovered Florida gift goodwill gun police rifle 2019-12-04
Dwight Widaman