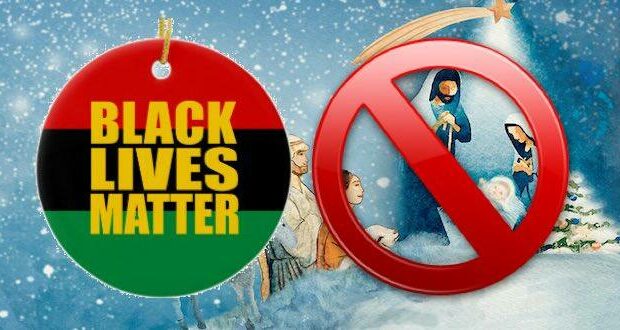 The organization celebrated Thanksgiving by accusing Americans of “eating dry turkey and overcooked stuffing on stolen land” and bashed Christmas, linking to a story that says the holiday promotes “white-supremacist-capitalism.”

The statements about Christmas come during a string of vandalism and destruction of Christmas decorations, including the torching of a 60 Christmas foot tree in New York City.

The group’s official Twitter account posted a message on Thanksgiving saying, “YOU ARE ON STOLEN LAND,” with a subhead of “Colonization never ended, it just became normalized.”

The group also posted a message saying: “This #Thanksgiving we send our deepest love to families whose loved ones were stolen by state-sanctioned violence and white-supremacy. May we offer a special prayer for those who will forever have an #EmptySeatAtTheTable.”

“Colonization never ended,” another tweet from the group said. “It just became normalized. This nation was built on the stolen land of Indigenous people and the stolen labor and lives of our African Ancestors.” The tweet directed users to a website showing where native tribes once lived across the world.

And while most can agree that Christmas has become over-commercialized, the organization says the root is endemic racism.

Then BLM posted: “For 7 years #BlackLivesMatter has been drawing connections between white-supremacist-capitalism & police violence with our #BlackXmas campaign.”

The tweet included a link to an article in the “Los Angeles Sentinel” about “Black Xmas” by Dr. Melina Abdullah, a professor of pan-African studies at California State University in Los Angeles. In the piece, Abdullah wrote: “Now is when we must renew our commitment to struggle — not simply against white-supremacist-capitalism but toward imagining and building new visions for the world and for black people.”

“For the last seven years, Black Lives Matter has been challenging people to “dream of a Black Xmas,” to intentionally use our resources to: #BuildBlack (invest in black-led, black-serving organizations), #BuyBlack (spend exclusively with black-owned businesses from Black Friday through New Year, and #BankBlack (move our money from white corporate banks to black-owned ones),” she wrote “In 2020, #BlackXmas expanded to a nationwide campaign, with a website, blackxmas.org, that provides a listing of organizations to support and businesses to shop.”

The BLM posts came as the liberal media claimed Thanksgiving represents genocide for some people.

“What is Thanksgiving to Indigenous people? ‘A day of mourning,’” a “USA Today” headline read. “For many, rather than a celebration of peace and shared prosperity between Native Americans and Pilgrims, Thanksgiving represents the dark shadow of genocide and the resilience of native people.”