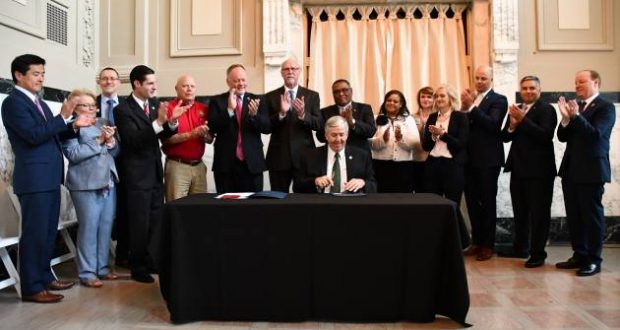 Joe Reardon hopes it will lead to additional regional cooperation.

“And an end to the destructive back and forth of luring of companies from one side of the state line to the other, with no creation of net new jobs,” Reardon says.

The bill impacts companies moving between three Kansas counties and Missouri’s Cass, Clay, Jackson and Platte counties. The Missouri law will only take effect if the Sunflower State passes a reciprocal agreement.

Reardon, who spoke at Governor Parson’s bill-signing ceremony at Union Station this month, says resolving the border war has been a top priority for the Chamber and for business leaders in the region.

“We believe our true competition is not between us or across the line that’s not far from outside this door (Union Station), but it’s with other regions like Dallas, Denver, Nashville,” says Reardon.

The Hall Family Foundation says more than 10,000 jobs moved between Missouri and Kansas during the past decade, with an incentive cost of $330 million.

The jobs all moved in the Kansas City region.

Reardon notes cooperation has happened before, noting that voters on both sides of the state line backed a 1996 tax increase to restore Union Station, which was crumbling at the time. Reardon says fast forward to 2015 at Union Station, after the Kansas City Royals won the World Series.

“This became the gathering spot for almost 800,000 Kansas Citians from all over, both sides of the state line,” Reardon says.

The renovated Union Station includes an Amtrak depot, a permanent rail exhibitknown as the KC Rail Experience, a planetarium and a science city.

Governor Parson says Missouri and Kansas have both spent “well over $100 million” in the border war, telling reporters after the bill-signing that “there’s no reason we can’t be using that money for a lot better purposes than just jumping from one side of the state (line) to the other.”

Kansas Governor Laura Kelly (D) has issued a statement echoing Governor Parson’s comments about the irresponsible spending by both states, “with little actual job growth for either state.”