Home / News / Columns / Kansas pendulum swinging to the other side? 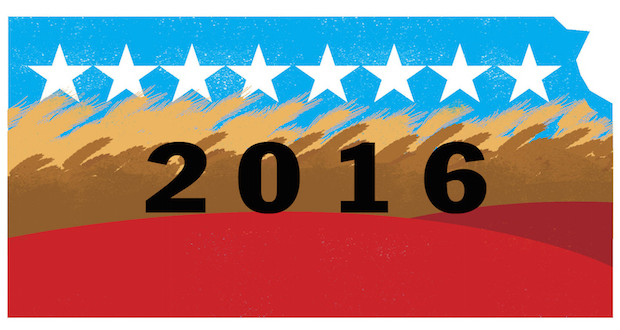 Kansas pendulum swinging to the other side?

Dorothy, you may not be in (conservative) Kansas any more.

Anyone who wasn’t prepared to see conservative losses in the August primary (with more perhaps to come in the general election) simply hasn’t been paying attention. Ever since conservatives took control of the state senate in 2012 there has been a constant drumbeat of attacks on Gov. Sam Brownback’s administration and the legislators who support him.

In addition, after Republicans were given majorities in both houses of Congress and still failed to halt President Obama’s agenda, including abuses of power at the IRS and the Department of Justice, many conservatives simply lost faith in the Republican Party as a vehicle for change.

In Kansas, Republicans running for national office have been helped by the general weakness of Democrats at all levels in the state. They also learned from the 2014 primary contests and moved to head off potential areas of weakness long before the 2016 election cycle began.

Sen. Jerry Moran and 3rd District Congressman Kevin Yoder have run their offices like clinics in political science. They spend considerable time back in the state, have responsive constituent services and are respectful to all elements of the party (and often beyond). It also doesn’t hurt that both are excellent at raising money, discouraging potential rivals so should coast to fairly easy victories.

The same cannot be said for state legislators. They have been saddled with supporting an economic agenda that rankles the populist core of the conservative base while failing to generate much support from other constituencies. Confronted on one side with the governor’s intransigence and the hostility of their constituents on the other, many simply stepped down, or were caught between the proverbial rock and a hard place.

While lowering income taxes may have seemed to be a good idea, (based on comparisons with states that aren’t really comparable) that act and the infamous LLC exemption resulted in increases in the highly regressive sales tax. That in turn resulted in higher costs for working and middle class consumers while placing Main Street merchants at an almost 10% deficit when competing with online merchants who don’t charge a sales tax.

Worse yet, higher costs of government at the local level put more strain on the same working and middle class homeowners owing to increases in the equally regressive property taxes, coupled with an appraisal system that has remained broken despite legislators’ best efforts to fix it.

That said, much of the critique of Brownback centers around unfair and deceitful claims regarding education funding. Across the state superintendents decried cuts that were never made. State funding for K-12 education is over 50% of the state budget and is higher now than when Brownback took office. However, so effective has this campaign been that in Johnson County citizens were voting for legislative candidates who were promising to raise their taxes so they could support school districts in Wichita and else where. Go figure.

Indeed, despite the fact that the movement to oust four Supreme Court Justices has been largely non-partisan look for proponents of retention to try and attach the effort to Brownback.

Regardless the ultimate outcome of the November elections, what is already clear is that the Kansas legislature is going to be a far different place during the next session and those newly elected “moderates” may wish they’d stayed home.

Previous: The dirty truth about this dirty political poll
Next: Photo ID is required to do these things yet voting doesn’t?