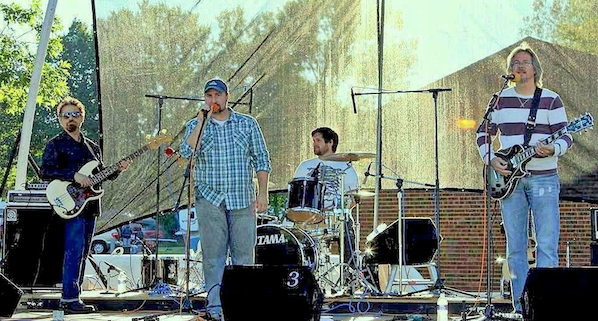 Hailing from Blue Springs, the band Grandeur has been flying under the radar for a while, writing a collection of praise and rock with a focus on the Lord. As mentioned last month, Metro Voice got a chance to catch up with the band and even had a chance to get a sampling of what’s to come on their sophomore album, slated for release later this year.

With a band ranging in age from their late-20s to their late 50s, Grandeur have a rock style reminiscent of 70s hard rock, but with a modern flair. Lyrically, the band does not shy from their convictions to share the Gospel. 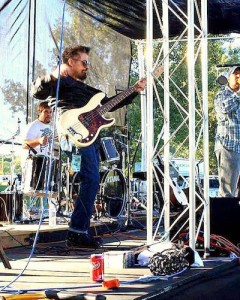 “I felt like with secular music, the meaning wasn’t there,” Casey George, Grandeur’s drummer and youngest member, says, “I had the drive to make music – not just to make music, but with a meaningful message behind it – a message that is only present in Christian music.”

Likewise, each member of the band has been affected by faith.

“I realizedâ€¦ my ability to play by ear, write songs, and play music was meant for God and to be used to glorify Him,” says guitarist Jim Grohman.

“I was raised in a Christian home,” bassist Robbie Cairns recollects, “my mom was the church pianist; me, along with all four of my brothers and sisters did music as a family. When I was around 11 [I] could feel in my heart that Jesus was tugging on my heart to get to know him. Wasn’t long before I went forward to accept Jesus as my personal savior.”

“I was brought up with a multitude of religious influences. God had his hand on me every step of the way. I received Christ into my heart at a young age, at a summer backyard Bible study.”

Toney says it was the teachers at this Bible study which influenced his decision. “They spoke of God saving Noah and his family because they accepted and trusted Him to. A very simple but profound clarity in the middle of the many beliefs presented to me by then.”

Not all of their life history has been so clear or well-defined.

“Religion always played a big role in my family, until I was about 10 years old. My parents stopped going to church, so I did too,” George says. “I didn’t go again â€˜til I met my wife. In efforts to spend more time with her, I started to go to the church she went to, which brought me closer to her as well as God.”

“In high school I smoked my first joint,” Cairns says, “from then on sex, drugs, and rock â€˜n’ roll were my life up until when my wife ask me to choose between [the family] or the band.”

Cairns says he made the right decision, leaving the band behind, but “when I did go back to church, with my wife and kids back then, and played in the church bands, I was still smoking pot and drinking.”

“It wasn’t until Feb 2002 when my wife was diagnosed with stage 4 ovarian cancer; I fell to my knees and ask God to help me. I started going to AA and quit both drugs and drinking cold turkey.”

God’s deliverance was a boon to Cairns, but “then, Aug 26 of the same year, after being married just under 25 years she passed away in my arms. It didn’t seem real, just a nightmare I was living in.”

Cairns fell back into drugs and alcohol, until “My two daughters told me to quit feeling sorry for myself and get my [stuff] together.” He continued on his rollercoaster lifestyle, even getting remarried and struggling with addiction. Eventually, however, with the grace of God, “January 1, 2004, I stopped everything and have not been drunk or high on drugs since.”

Likewise, even growing up in a single parent home and never knowing his father, Grohman sees God’s hand holding him throughout his life. “[Mom] could’ve chosen to abort me,” he says, but because she didn’t, “look at what God’s doing in my life!”

Grandeur’s message of loss and seeking God’s will is prevalent in their music, lyrics and lifestyle.

“[Our] goal for the new record was to make a strong smooth connection from the positive message of our lyrics to a modern rock feel out of music,” George says, “I wanted a medium where we can showcase our talent, but make it evident that we play for Him.”

“I think the greatest thing about the age difference,” Cairns says, “[is] it makes for a 70s and 80s song writing technique with a 21st century sound. Kind of weird cool.”

As for influences, the band isn’t bashful about their love of what some consider to be classic rock.

“I’m old enough to remember seeing the Beatles do their first show on The Ed Sullivan Show,” Cairns says, “It was Feb 9, 1964, I was 6 years old, hooked on being in a band and told my mom that I wanted a guitar.” Citing Motown as a hefty influence, Cairns says the Beatles, and “also The Monkeys TV show in the 1960’sâ€¦ then in the 70’s Black Sabbath and Deep Purple were the ones for me.”

Likewise, the band’s youngest member was influenced by much of what came out in the 70s and 80s.

“I’ve always been inspired by John Bonham’s playing style,” George says, “growing up, I listened to a lot of Led Zeppelin records. I’d practice playing drums by playing along to them, as well as some Van Halen…” Otherwise, “my dad was a musician (including a church band drummer), so I always had that to look up to. Drums just kind of came naturally to me.”

Grohman agrees, “Eddie Van Halen and Neal Schon were my beginning influences. Eddie was amazing to say the least, and I loved the bluesy passion and emotion of Neal.”

Citing a diverse array of music including, Matthew Ward, the Eagles, Journey, Clay Cross, and Kansas, singer Toney ultimately gives his mother credit as an inspiration.

“It was our home therapy,” he says, “the funny thing, now, is that people love for me to sing, but my kids ask me to be quiet!”

Although each member of Grandeur has contributed pieces of the songs and songwriting, “the band, as a whole, stitches them together.”

Each member of the band still grapples with the foibles and joys of this world. Robbie Cairns recently lost a grandson to Tay-Saches disease; Casey George is the proud father of an eleven-month old son; Jim Grohman works at being a good husband, and the father he never had, while his grand-daughter struggles with a life threatening genetic disorder known as Prader Willi Syndrome; and Chad Toney’s brother has battled ALS for a time, and continues to struggle. Through all of this, however, the band pushes on; delivering what will likely be a successful second release, and pursuing their mission to share God’s Love.

Casey speaks honestly, perhaps speaking for the band, when he says “I am truly grateful and honored to share wherever God leads me.”

Grandeur is currently recording at Chapman Recording and Mastering in Kansas City, being tracked analog on 24 track 2″ tape, and hopes to have the album ready for distribution late fall and the album will also be released on vinyl with digital download code included. In stores late 2015.

Previous: Tim Tebow’s Mom to Speak May 30
Next: Money Can’t Buy Her Love