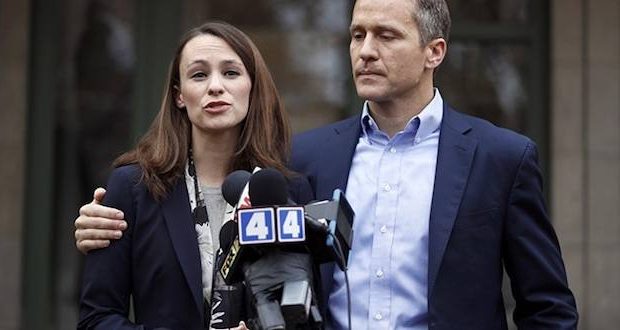 The felony case against Eric Greitens may be falling apart after earth-shaking statements made under oath by the key witness.

The woman with whom Governor Eric Greitens’ had an affair, testified under oath last Friday that she may have “dreamed” about the key evidence and that it may not exist. It was also revealed that it was she that took and sent photos.

According to a defense motion filed by the team representing Greitens, the woman in the case said “… I haven’t talked about it [the phone] because I don’t know if it’s because I’m remembering it through a dream or I – I’m not sure, but yes, I feel like I saw it after that happened, but I haven’t spoken about it because of that.”

That’s a problem for the District Attorney if Greitens is to be found guilty as the one thing still missing is evidence.

Greitens, while having acknowledged the affair and obtained marriage counseling for himself and his wife, has always contended that the charges are politically motivated and are not based on any evidence of wrongdoing. Others have pointed out the close ties of individuals connected with the prosecution to partisan Democrat Party operatives in the state.

Greitens’ criminal defense team has filed a motion to compel the prosecution to hand over evidence favorable to him including the photos that he supposedly took.

Greitens is alleged to have photographed a woman “subsequently transmitted the image contained in the photograph in a manner that allowed access to that image via a computer.”

The document filed by the Dowd Bennett law firm contends the woman in question referred to as K.S. never saw a photograph and that any assertion by her that she saw a phone on the day in question was based on a dream or vision.

The motion also asserts that there’s no evidence of a transmission of any image. The court document was submitted after the defense questioned K.S. under oath Friday. The filing quotes K.S. as telling the assistant circuit attorney that she hadn’t spoken about the phone because she may have remembered it through a “dream”.

The document says K.S. testified that she had informed the Circuit Attorney that her recollections may have been from a dream or vision, but the Circuit Attorney did not turn that information over to the defendant. It also said K.S. did not inform the Missouri House Committee looking into the charges against Greitens that the phone could be the product of a dream.

The defense motion requests the Court to order the Circuit Attorney to hand over any further statements by their witness that her testimony may be based on a “dreams” or “visions,” plus statements that she didn’t view herself as an invasion of privacy victim after the March 2015 encounter.

The filing contends that in an event never previously disclosed to the Grand Jury or the House Committee, K.S. now admits she transmitted images through FaceTime of herself to Greitens while she was in a state of partial nudity in June 2015.

It also says that K.S. acknowledged that for months after the alleged “invasion of privacy,” she continued to see Greitens willingly. The motion says she never viewed anything that happened as a criminal matter, agreeing that the “last thing on [her] mind” even in January of 2018 was a criminal prosecution.

The defense further is asking to see a videotape or any information pertaining to a video of an interview conducted by the prosecution’s hired private investigator, William Tisaby, of K.S. The defense says it’s been told by the Circuit Attorney claims that the videotape machine used for the interview did not work.

–Wire services contributed to this story