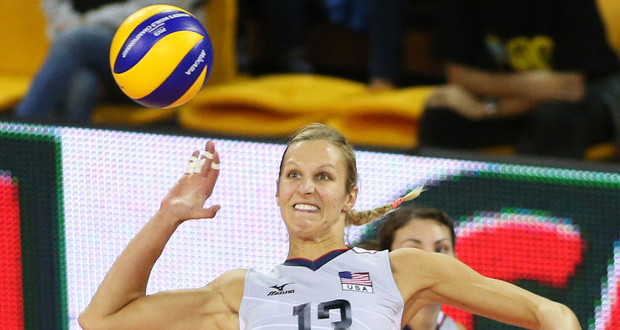 RIO DE JANEIRO — Christa Dietzen comes by the “Mom” nickname her teammates have given her naturally. She’s the oldest in her extended family, and she’s one of the oldest players on the U.S. women’s Olympic volleyball team.

For Dietzen, the captain of the U.S. team in Rio, her interest in caring for those around her comes not just from any mothering instincts she might have, but from what she believes is required of her as a Christian.“What does it look like to be a Christian athlete?” Dietzen asked. “I think the first piece for me is, how do you love your teammates?”

A native of Pennsylvania, Dietzen says the answer to that question is in getting to know them. She and her husband regularly have teammates over to dinner — especially younger and newer players on the U.S. national team.

Dietzen wants to know her teammates, their families and their backgrounds — what excites them and what scares them. Doing that helps her minister to them and love them well.

A third element in her role as a Christian athlete is in how she conducts herself.

“Always knowing that you have eyes watching you,” said Dietzen, “from what you’re saying to people, how you carry yourself on and off the court, what you’re posting on social media and how you treat others.”

Her outlook on her sport and how she interacts with her teammates has changed considerably in recent years, since Dietzen became a Christian. Though she grew up in a home where she went to church on Sundays and had a family built upon Christian values, Dietzen said she didn’t have a relationship with God.

“I actually taught Sunday school in college, but all the same, I didn’t know what a relationship with God looked like,” she said.

After finishing her first professional season in China, she began attending some Fellowship of Christian Athletes events in southern California. She was volunteering at one such event where various athletes were sharing their testimonies when a pastor gave an invitation, asking anyone who wanted to give his or her life to Christ to stand up.

“I was in the back row, and what I now know as the Holy Spirit tried to throw me off my chair to stand up,” Dietzen recalled.

She resisted, thinking that since she was a volunteer, she already should have made that decision, even though she didn’t know what it meant.

While she did not become a Christian that night, the Lord kept working in her heart. A few weeks later, in June 2010, Dietzen said, she committed her life to Christ.

She and her husband are part of Rock Harbor Orange church in Orange, Calif. Though Dietzen travels a lot and doesn’t get to attend there regularly, she said she’s looking forward to being more plugged in there when her volleyball career is over.

Dietzen expected in Rio to spend her time in the Olympic village interacting with athletes from all over the world.

“I really enjoyed that in 2012, having those Bible studies, and having those spiritual connections off the court, too,” she said.

Previous: Before flooding Louisiana with ‘help,’ read this
Next: ‘Emotional’ experience of Moses’ Tabernacle comes to KC Sept. 16–25