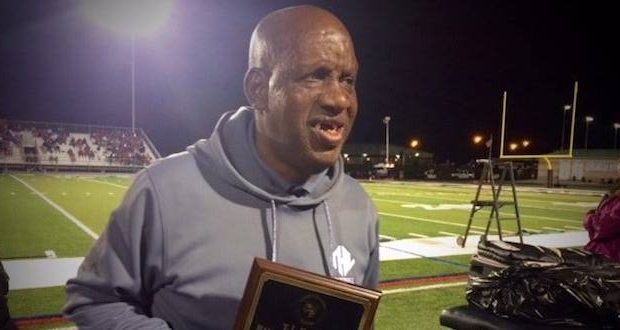 Meet Radio.  He’s a bit of a legend in the small town of Anderson, South Carolina.  At 72 years old he’s still in the 11th grade – and he wouldn’t have it any other way.

“Every year they take a group picture in the gym of all the seniors that’s graduating that year,” says Radio’s best friend, Coach Harold Jones. “He will not get in that group.  He said he knows he would have to leave!”

Not only is Radio, a student at T.L. Hanna High School, is perhaps the most revered member of its football team – the Yellow Jackets – even though he’s never played a second of football. 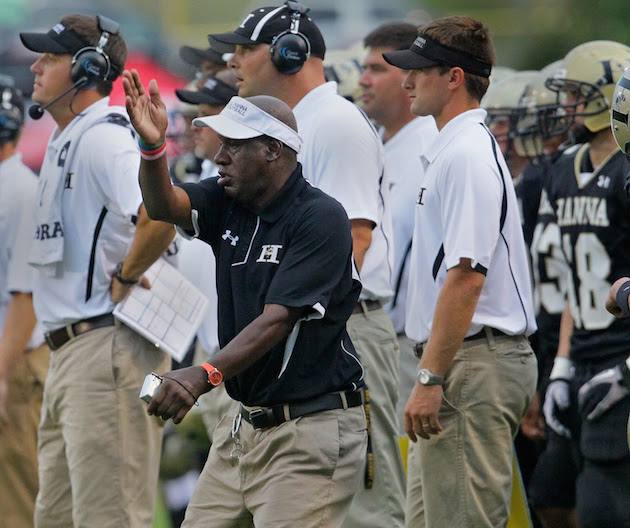 “I think it was just God’s plan that put Radio right down there on that practice field,” says Jones.

It was 1964, in the heat of August, when JV coaches Harold Jones and Dennis Patterson noticed a young man coming to the practices every day, holding a transistor radio to his ear.

Coach Jones explains, “He started mimicking us coaches and the players.  So we was trying to get him to come closer to us.  We wanted him to get involved.  So we said, ‘Well, let’s-lets offer him a Coke maybe and a hamburger, and maybe we can get him to come.’  And that was the trick.”

They learned he was 18-year-old James Robert Kennedy, nicknamed “Radio” because of his obsession with radios.  In today’s terms, he was born with an intellectual disability, and was unable to learn how to read or write, and could barely speak.  But the coaches and players saw past that, and soon made him one of their own.

Coach Jones says, “He wanted to be like the coaches and all.  I was a defensive coach so, I’d give the sign, you know, and he’d do the same thing.  And then every once in a while if I, you know, got mad at an official, you know, he’d get mad at the official!”

Radio would become a permanent member of the team, going to practices, giving pep talks, and leading them onto the field before games.

“Radio really loved those guys out there.  And the coaches.  He’d do wind sprints,” coach Jones continues.  “And you know, they just, they loved it.  He just grew a part of them.”

He came from a rough neighborhood across town, and lived with his mom, stepdad, and younger brother, who was also intellectually disabled.  Radio loved going into town, perhaps to escape the ridicule and bullying from kids in his own neighborhood.

“Their mother, you know, she worked two jobs.  She worked in the hospital and then she did housework.  And her biggest concern was these two boys, you know.  Keep them out of the institution.  I told her, ‘We’ll take care of Radio while he’s at the school and everything, don’t worry about it,’”  states Jones.

So in 1970, the coaches arranged for the 24-year-old to enroll in Hanna High School as a junior.  Radio was ecstatic says Jones. “I think that saved his life, being able to be out here at Hanna.  He was learning all the time.”

Readers may be familiar with the story portrayed in the movie “Radio” starring Cuba Gooding, Jr.

But the community at Hanna High soon would realize that what they got from Radio was more than what they were doing for him.  “He loves to give hugs.  I mean, if you’re having a bad day, he can really raise you back up, you know?  He’s just part of our family.  Like I say, I think the good Lord caused all that.”

This wasn’t the first time Coach Jones reached out to someone who needed friendship.

“I had something in my heart for people like that,” he says.  “There was a kid about my age, lived across the street from us.  A lot of people would pick on him.  So I kinda defended him, you know.  And he was my friend.  I just think it was the right thing to do.

In 1996, Sports Illustrated writer Gary Smith penned an article about the friendship between Coach Jones and Radio.  From there, Hollywood director Michael Tollin brought their story to the silver screen in the movie Radio. 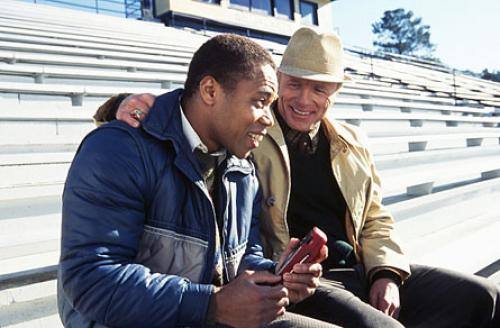 Says Jones, “When I’m answering an email, I always put down, you know, if it’s a student I say, ‘Well, please find a student that has special needs in your school and become their friend.’  Individuals that have got a special need, they’re just like you and I.  And they should be treated with respect and everything like we want to be respected.”

When Coach Jones retired in 1999, his biggest concern was whether his successors like Terry Honeycutt and others would take care of his dear friend.  He didn’t have to worry long.

Jones is proud of their response. “They stepped up to the plate, each one.  They love him.  They want to be part of him, you know?  They just – I mean, Radio’s “Radio” now.  He’s the man!”

Today that friendship continues and at Hanna High School you will still find that same 11th grader greeting everyone with a smile and a hug, and cheering on his beloved Yellow Jackets.  From Radio – a young man who couldn’t learn to read or write, or even play a sport, comes a lesson we all need to remember.

As Coach Jones says, “People with special needs, you know, they give us more love than we can actually return.”

Both Coach Jones and Radio now have their own ministry.