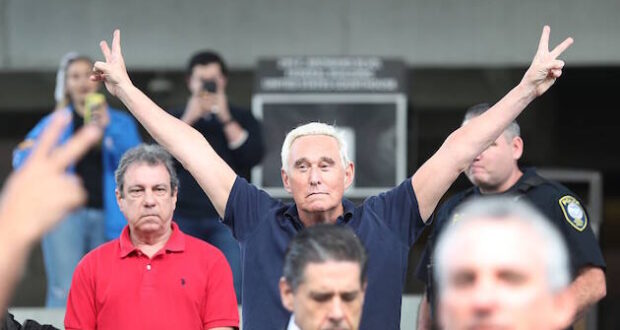 Roger Stone emerges from his home after his sentence was commuted. Stone says it allows him to continue to defend himself without the risk of being infected with coronavirus in prison.

Pelosi, along with many of her Democrat colleagues, excoriated the president for providing clemency for Stone, who was scheduled to report to prison next Tuesday. The top Democrat leader called the decision “an act of staggering corruption,” while vowing Congress would take steps to prevent similar actions in the future.

Justice Department records that this makes only the 10th commutation under Trump.  Former President Barack Obama made 1,712. In addition, 500 of  Obama’s commutations or pardons were violent criminals who had life sentences.

But Democrats and media outlets have not brought up the huge number of Obama actions. They’re focused on President Trump.

“Legislation is needed to ensure that no President can pardon or commute the sentence of an individual who is engaged in a cover-up campaign to shield that President from criminal prosecution,” Pelosi said in her statement.

Stone, 67, was sentenced on Feb. 20 to three years and four months in prison. He was convicted in November 2019 on all seven counts he was charged with in relation to an investigation into Russia’s interference in the 2016 election, including obstruction, witness tampering, and making false statements to Congress.

The political consultant and lobbyist had recently escalated his bid to delay the start of his prison sentence by filing an emergency request asking the appeals court to push back the date of his self-surrender. He argued that his age and undisclosed medical issues would leave him vulnerable in the prison system amid the CCP (Chinese Communist Party) virus pandemic.

The appeals court rejected Stone’s request saying that Stone is “not legally eligible for further postponement of his reporting date” under the law he was requesting his delay.

The ruling was quickly mooted as Trump signed an Executive Grant of Clemency commuting Stone’s sentence later in the day. The White House said in a statement that Stone was “a victim of the Russia Hoax” that had been perpetuated for years by “the Left and its allies in the media” in efforts to undermine the Trump Presidency.

“The collusion delusion spawned endless and farcical investigations, conducted at great taxpayer expense, looking for evidence that did not exist,” the statement said.

When the prosecutors from the Special Counsel’s office was aware that the investigations would not bear fruit, the prosecutors then turned to investigate wrongdoing against associates of Trump, the White House claims.

“These charges were the product of recklessness borne of frustration and malice. This is why the out-of-control Mueller prosecutors, desperate for splashy headlines to compensate for a failed investigation, set their sights on Mr. Stone,” the statement said.

Then-special counsel Robert Mueller spent about two years investigating allegations of Russian interference in the 2016 presidential elections. His report concluded that while Russia did attempt to interfere in the election, there was no evidence to establish that any members of the Trump campaign “conspired or coordinated” with Russia ahead of the election.

Trump defended his decision to grant clemency to Stone in a statement on Saturday, saying that the 67-year-old was targeted in “an illegal Witch Hunt that never should have taken place.”

“It is the other side that are criminals, including Biden and Obama, who spied on my campaign—AND GOT CAUGHT!” the president wrote.

The president’s power of executive clemency is granted by the U.S. Constitution and allows him to pardon sentences for federal criminal convictions or grant clemency in the form of commutation, amnesty, remission, and reprieve, except in cases of impeachment. A presidential pardon sets aside the punishment for a federal conviction, while a commutation of a sentence could reduce a sentence either totally or partially without wiping out the felony convictions.

Presidential pardons have long been a subject of debate and presidents using this power in the past have attracted criticism and accusations of misconduct. President Gerald Ford’s controversial decision, for example, to pardon former President Richard Nixon for involvement in the Watergate scandal was not popular at the time and resulted in allegations that Ford had made a secret deal for Nixon’s resignation.

Similarly, the 140 pardons and 36 commutations issued by President Bill Clinton during his final hours in office triggered a criminal investigation.

Congress has previously made attempts to amend the presidential pardon power in an effort to prevent self-serving pardons. Some proposals include limiting the pardon power during a lame-duck period, and allowing Congress to vote by resolution to disapprove the granting of a pardon within 180 days of its issue, according to legal scholars (pdf).