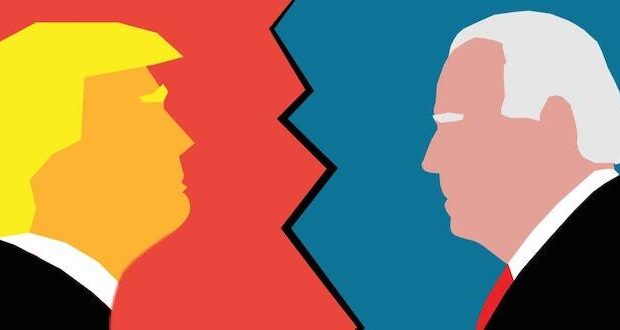 Voters moving away from Biden after debate: new IBD/TIPP poll

The nation’s most accurate polling organization says that Joe Biden‘s lead over Donald Trump has been cut in half.  In its new election poll, IBD/TIPP found that Biden is up by just 2.7 points (48.6% to 45.9%) among likely voters, which is within the poll’s margin of error. An IBD/TIPP poll of likely voters released on Sept. 21 indicated Biden had a 5.6-point lead, 49.5% to 43.9%. An early September IBD/TIPP showed Biden with an eight-point edge, 49% to 41%, among registered voters. The IBD/TIPP presidential election poll has been the most accurate over the past four election cycles and was one of only two national polls to correctly predict the outcome of the 2016 Presidential Election.

The news comes as IBD/TIPP found that Trump supporters are unlikely to admit their preference for Trump it to pollsters.

“Overall, 20% of registered voters say they’re uncomfortable revealing their preferred candidate, but that rises to 28% among independents,” it found. That means that there could a several point lead by Trump over Biden that polls are not capturing.

Those who changed minds after debate now support Trump

Notably, 19% of voters who watched or listened to the first presidential debate indicated that they plan to switch their vote, with the majority of those swinging towards Trump (11% vs. Biden’s pickup of 8%), even though more people thought that Biden won the debate (44% to Trump’s 33%).

The latest IBD/TIPP poll surveyed 1,221 registered voters, from September 30 to October 1– after the Trump-Biden presidential debate on Tuesday night but before the early Friday news that President Trump has tested positive for the coronavirus. The poll was conducted online using TechnoMetrica’s network of online panels to provide the sample due to COVID-19. The weighted likely voter sample reflects 411 Democrats, 403 Republicans and 201 independent voters.

“The latest data shows there are a lot more moving pieces in play for the election than most people realize,” said Ed Carson, IBD’s news editor. “This is a horse race that remains up for grabs. Ninety-seven percent of registered voters indicated that they are likely to vote in the election, and 19% shared that their vote is likely to change before November 3rd. Now with President Trump’s COVID-19 diagnosis, the race becomes even more unpredictable.”

“Customary wisdom says that the presidential debate didn’t make a difference to voters, but in this case, the data shows that is a false narrative. A 19% swing is substantial,” said Raghavan Mayur, president of TechnoMetrica, who directed the poll. “Four years ago, everyone said the race was over, and we all saw how that turned out. Based on the data we are seeing, the 2020 election is far from decided.”

Investor’s Business Daily (IBD) is a leading financial news and research organization recognized for proprietary stock screens, comparative performance ratings and a record of identifying stock leaders as they emerge. The company takes a data-first approach to investing, educating investors about how to invest successfully using tested methods and sound research. IBD has honed its approach over the last 50 years to help investors make smarter decisions. Its stock lists have outperformed the S&P, and its presidential poll, the most accurate over the past four election cycles, was one of only two national polls to accurately predict the outcome of the 2016 Presidential Election. IBD offers a number of interactive stock research tools and provides information for investors of every level. To learn more about all that IBD has available, please visit www.investors.com.

Previous: Israel Allies Foundation recognizes top 50 Christian allies
Next: FROM THE CHEAP SEATS – All good things must come to an end