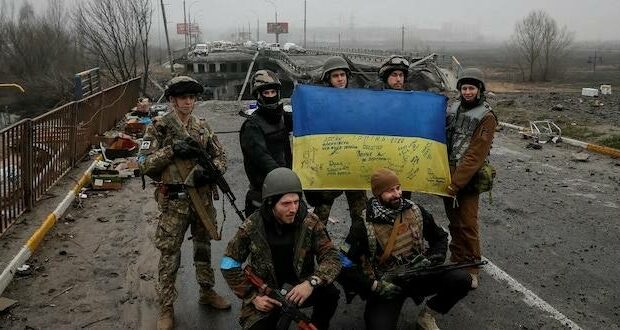 Ukrainian soldiers display their flag as Russians retreat. Russian media is changing its tone in coverage.

As Russian forces retreat in the face of huge Ukrainian advances to take back their territory, Russian state-run media is starting to crack.

The Putin-controlled media outlets, which almost exclusively dominates cable and internet in the country, has in the last six months denied the invasion was taking place to praising the “righteous de-Nazification of Ukraine.”

Overall, compared with the first few months of war, the subject has faded into the background.

According to a recent study, state TV mentions the war less and less while “de-Nazification,” one of the stated goals of Moscow’s “special operation”, barely gets mentioned at all.

More airtime is devoted to simple entertainment, as opposed to the persistent political programming seen in February and March.

However, on September 6, Ukraine began a counteroffensive in the Kharkiv region, recapturing several key cities and hundreds of towns and occupied territory. Ukraine has now recaptured more of its territory than Russia had captured in the first two months.

This reportedly followed a weeks-long, purposeful, Ukrainian disinformation campaign of “leaked, exclusive reports,” designed to trick Russia into thinking the plan was to retake Kherson, to the south.

At first, pro-Russian bloggers and outlets played down Ukraine’s advance.

“There is no panic in Balakliya,” the Telegram channel Veteran’s Notes, which boasts 192,000 subscribers, wrote on September 6.

A number of pro-Russian feeds, including that of famous talk show host Vladimir Solovyov, reposted that message.

By the following day, however, there was a more sullen tone.

“It’s been a tough day,” he told his 122,000 readers on Telegram. “But now it has probably become clearer what it was like for our grandfathers and grandmothers in the Great Patriotic War [WWII] … It will be difficult. Very difficult in places. But we don’t really have a choice.”

Speaking on the loss of the major Ukrainian city Izyum, the host of a Russian political talk show on Match TV, a sports channel, urged his viewers to “pray for our guys”.

The government and its friendly voices in the media have acknowledged that Russian forces have withdrawn from previously held positions, but have avoided outwardly calling it a loss.

Ministry of Defence spokesman Igor Konashenkov, for example, announced said the decision was made in order to redeploy forces from Balakliia and Izyum and reinforce the Donetsk region, which is being held by separatists.

The state-owned Rossiyskaya Gazeta newspaper made no mention of the gains by Ukraine on Sunday, instead claiming that Ukraine suffered 4,000 fatalities between September 6 and 10. Western officials have said Ukraine actually suffered a few dozen.

There are some news reports of Ukrainian incursions being thwarted on the Kharkiv oblast’s Oskil river and though a curious reader might infer from that just how far the Ukrainians have come, this fact is not dwelt upon.

Instead, Rossiyskaya Gazeta and other pro-Kremlin commentators have suggested that Ukraine’s push may have been boosted by outsiders joining the fray.

After the initial shock of the Russian retreat, Kremlin supporters were quick to return to a combative pose.

On Sunday night, Solovyov appeared on his talk show and called for attacks on civilian infrastructure.

However, the government has also come under fire from hardliners for not being committed enough to the fight.

On NTV, liberal politician Boris Nadezhdin said during a televised debate that defeating Ukraine was impossible and called for peace talks.

In a clip that has been widely shared on social media, Nadezhdin avoided blaming President Vladimir Putin himself, instead accusing the president’s advisers of misinforming him about the situation in Ukraine before and during the invasion.

The word “war” is used extensively throughout the segment, as opposed to the officially mandated “special operation”, including by both Nadezhdin and politician Alexander Kazakov, who took issue with Nadezhdin’s dovish tone.

“We need to win the war in Ukraine,” Kazakov said. “We need to liquidate the Nazi regime there. After that, whoever wants to can talk to us.”

“And how many years will we keep doing this?” Nadezhdin asked.

“However long it takes, because this special military operation …” Kazakov replied, only to be interrupted by Nadezhdin, who said: “So my 10-year-old kids will eventually get the chance to fight, right?”