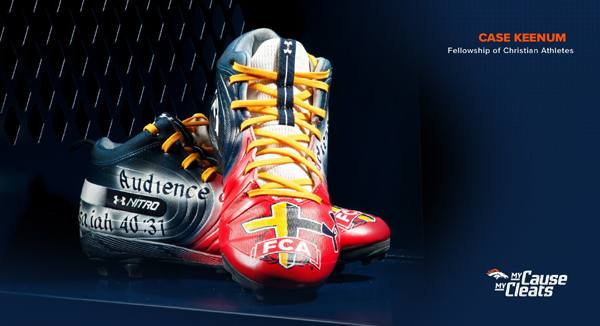 For all that the NFL occasionally gets wrong, it’s important to note that there still quite a number of genuinely good people associated with the league.

The 30-year-old journeyman found a home with the Broncos this year after an impressive 2017 with Minnesota, signing a two-year $36 million deal with Denver in the offseason. 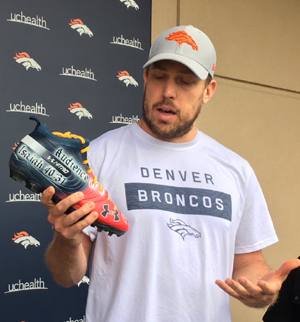 Sure, the Broncos are a paltry 5-6, but that’s already as many wins as the team had all of last year. And in a relatively weak AFC, the Broncos are very much in the hunt for a potential wild-card berth.

But for whatever good that Keenum does for Denver on the field, it’s surely his off-the-field impact that will resonate most positively.

As part of the NFL’s “My Cleats, My Cause” program, in which players can decorate and emblazon their cleats with messages supporting the cause of their choice, Keenum has chosen to represent the “Fellowship of Christian Athletes.”

FCA is a nonprofit organization whose mission statement reads: “To lead every coach and athlete into a growing relationship with Jesus Christ and His church.” FCA cites integrity, serving, teamwork and excellence as its core values.

Keenum’s cleats are adorned with FCA’s colors and logo, and include “Isaiah 40:31.”

That well-known Bible verse reads, “But those who hope in the Lord will renew their strength. They will soar on wings like eagles; they will run and not grow weary, they will walk and not be faint.”

It’s an awesome passage and an even better message for Keenum to promote.

For anyone who’s been paying attention, the quarterback’s Christian outreach shouldn’t come as a particular surprise. This is hardly the first time he’s professed his faith on a public stage.

During last year’s NFC divisional round game between Keenum’s former team and New Orleans, Keenum connected with Vikings receiver Stefon Diggs on a 61-yard touchdown pass that stunned the Saints.

After the game, Keenum gave a public profession of his faith.

“This is probably going to go down as the third best moment of my life,” Keenum told a national television audience in the immediate postgame interview, “behind giving my life to Jesus Christ and marrying my wife.”

Supporting FCA with his cleats is another strong statement, and it’s something Keenum should be commended for.

Baltimore defensive tackle Michael Pierce can be added to the list of NFL players having a positive impact off the football field as well.

Pierce, who just turned 26 on Nov. 6, is an undrafted free agent for the Ravens. The 6-foot, 340-pound run stopper out of Samford has been a solid contributor on defense but is one of the more unheralded defensive players in the NFL.

That needs to change, and hopefully it will after the way in which Pierce is choosing to honor Israel.

As part of the “My Cleats, My Cause” initiative, Pierce is using his cleats to honor Israel.

The blue cleats will have the Israeli flag on them as well as “IC” on the back, which stands for “Israel Collective.”

The Israel Collective, a group that helps foster a stronger and more positive relationship between American Christians and Israel, helped Pierce visit the country.

Of note, Pierce is a devout Christian. The first line of his Twitter bio reads “Psalm 28: 7-8.” (“The Lord is my strength and my shield; my heart trusts in him, and he helps me. My heart leaps for joy, and with my song I praise him. The Lord is the strength of his people, a fortress of salvation for his anointed one.”)

Pierce, citing a “oneness and connectedness” when he visited an Israel, said, “After growing up reading the Bible, to learn exactly where Jesus walked was awesome.”

“To go over there and see the difference and to see just exactly how the culture is,” he said. “I went to Shabbat dinner, I just enjoyed the company and learned so many different customs and things that they do that I’ve just never been aware of, how warm people are.”

Pierce also stressed how much of an impact Israel Collective had on him.

“Israel Collective has been a life-changing thing for me,” he said. “Having the Israel flag in front and center was paramount for me — I needed that to be right where it is.”

Pierce also emphasized how much he wanted others to follow in his footsteps and have a powerful experience in Israel.

“I hope that people will read about (this) and then maybe go over there — if they’re able to, of course — and to be able to see exactly what’s going on,” he said.

Considering the Ravens are in the thick of the NFL playoff race, the massive nose tackle knows a lot about winning on the football field.

Thanks to Israel Collective, Pierce now also knows about winning off the field. And it’s awesome that he’s choosing to reflect that for “My Cleats, My Cause.” 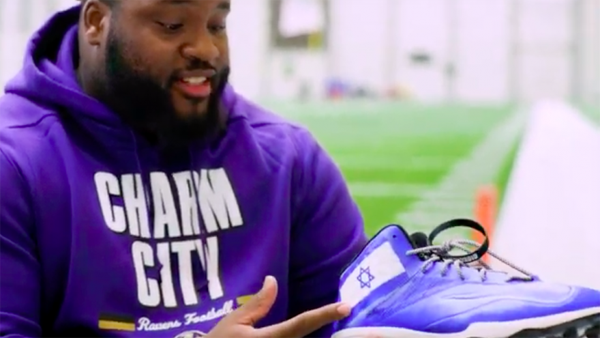 Previous: Why did Christian film ‘The Reliant’ get an R rating?
Next: KC Ballet’s ‘Nutcracker’ will leave you speechless 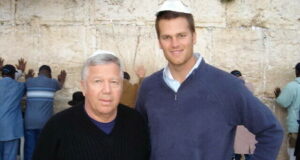 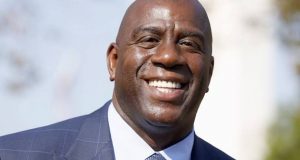 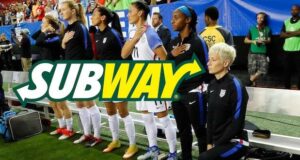 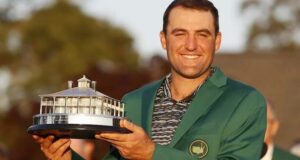