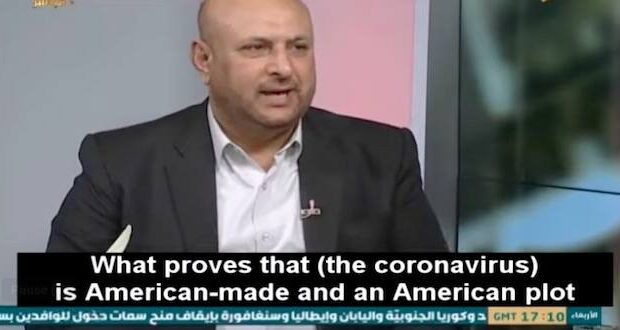 An Iraqi political analyst is spreading a conspiracy theory that the coronavirus is a plot by the United States and Jews aimed at population control. And he’s basing it on a 40-year-old book.

Muhammad Sadeq Al-Hashemi said in a February 26 interview on the Iraqi TV station Al-Ayam that in the 1981 thriller novel titled The Eyes of Darkness, American author Dean Koontz had written about the coronavirus.

READ: Don’t get caught up in fear of coronavirus

Al-Hashemi argued that this proves that coronavirus is an American plot and he said that the goal of the plot is to reduce the world’s population. He contends that in the past 10 years, two patents have been filed in the United States for the development of virus strains with the name “corona.”

He also blamed the death of American Indians from smallpox on Jews saying it was an effort to create a Jewish homeland. He also said that the Zionist lobby similarly cleansed one third of the population of Scotland and that the Rothschild family has a monopoly of laboratories that develop biological and nuclear weapons. Al-Hashemi also made the claim that the Rothschilds had been the ones who decided to use nuclear weapons on Hiroshima and Nagasaki in 1945.

Muhammad Sadeq Al-Hashemi: “What proves that [the coronavirus] is American-made and an American plot is that there is a book called Darkness Dwellers [i.e. The Eyes of Darkness] written by Dean Koontz in 1981, 40 years ago. Forty years ago, he already wrote about the coronavirus appearing in Wuhan. He gave [the virus] the same name, only adding ‘400.’ The ‘400’ is a riddle I couldn’t solve. It’s called Corona-400 [in the book]. Before 2015, and also in 2018, two patents were issued in the U.S. to develop a strain of viruses under the same name.”

Muhammad Sadeq Al-Hashemi: ” Yes, corona. The patent is registered in the U.S., with a number and with a date.

“The most prominent American economists talk about the need to reduce the world’s population.”

Muhammad Sadeq Al-Hashemi: “So how can I think well of the U.S., and reject conspiracy theories, when the U.S. is acting in keeping with them? If we study [American] political history, it is based entirely on conspiracies. In order to take root in what is today the United States… America was a British colony, and the Jews planned to cleanse the two Americas, so that they would become the real Jewish homeland, before Israel [was established]. So they spread anthrax through blankets. They annihilated 86% of the population of the U.S. with anthrax. The Zionist lobby used this against the Scottish people, thus killing one third of the population of Scotland. It was also America that put an end to WWII, following a Zionist decision. The decision was taken by the House of Rothschild. The world must speak about the Rothschild family…”

Interviewer: “Yes, it is a rich Jewish family…”

Muhammad Sadeq Al-Hashemi: “[The Rothschild family] finances and has a monopoly on laboratories that develop biological and nuclear weapons. [The Rothschilds] decided to end [WWII] and financed the attack on Hiroshima and Nagasaki.”

Al-Hashemi did not provide any legitimate corroboration for his Iraqi audience.

The coronavirus did originate in Wuhan, China but it has not specifically been determined how it was transferred from animals to humans.

The World Health Organization states that the latest coronavirus, Covid-19, is part of a large family of viruses that cause illness ranging from the common cold to more severe diseases such as Middle East Respiratory Syndrome (MERS-CoV) and Severe Acute Respiratory Syndrome (SARS-CoV). A novel coronavirus (nCoV) is a new strain that has not been previously identified in humans.

Coronavirus strains are zoonotic, meaning they are transmitted between animals and people.  Detailed investigations found that SARS-CoV was transmitted from civet cats to humans and MERS-CoV from dromedary camels to humans. Several known coronaviruses are circulating in animals that have not yet infected humans.

Even while American troops remain in the country, much of Iraqi media is filled with anti-American news reports and opinion pieces. The Iraqi coronavirus angle is just one of many. President Donald Trump has stated he wants to bring U.S. forces home.