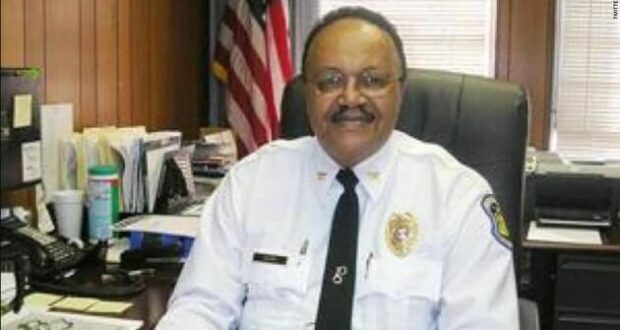 Hundreds of people gathered on June 9 to pay their respects to the family of David Dorn, a retired St. Louis police captain who was gunned down by a looter while trying to protect his friend’s pawn shop from looters on June 2.

The memorial did not receive the national news coverage as that of George Floyd who was killed during a police encounter. The death resulted in protests in cities across the nation.

The 77-year-old’s life was remembered during a public visitation at Hopewell Missionary Baptist Church in St. Louis, Missouri, with dozens of police officers and political leaders, including Missouri Gov. Mike Parson, in attendance, Fox 4 reported.

“Based upon the diligent work of the police department, collaboration with the Circuit Attorney’s Office, and the cooperation from the outraged community, we have issued charges for the tragic murder of” the 77-year-old Dorn, she said in a statement.

Cannon is being held without bond.

According to court documents, a television stolen from the shop was recovered at Cannon’s house; the serial number matched records from the pawn shop.

Video footage shows a Pontiac G6 pull up outside the shop and several people exit the vehicle before entering the store. Cannon and another man are seen running into the store; the other man passes several televisions to a third person, who places them inside the vehicle.

The footage showed Cannon leaving the store and walking toward the vehicle just before Dorn arrived. When the gunshots that killed Dorn were fired, Cannon was the only person standing at the corner.

“Multiple plumes of smoke are seen coming from the area where only the defendant was standing,” according to the probable cause statement. The investigator said in the statement later, “Once Dorn has been shot and falls to the ground, the defendant can be seen approaching the door to the pawn shop.”

Witnesses told police that after the shots were fired, someone yelled into the store to tell the others they could leave. All the subjects inside then fled through the front door.

Cannon admitted to being inside the store on the night of the murder and cutting his hair to try to alter his appearance. He was aware that his photograph was being circulated by law enforcement officials.

Jimmie Robinson was charged with first-degree burglary, armed criminal action, and stealing. His bond was set at $30,000.

“Our highest respect to the family of David Dorn, a Great Police Captain from St. Louis, who was viciously shot and killed by despicable looters last night. We honor our police officers, perhaps more than ever before. Thank you!” Trump wrote.

A friend of Dorn, Shanice Jackson, told Fox 4 that she wasn’t surprised by the turnout to the public visitation.

“He was loved by so many people. He was respected by many people,” Jackson said Tuesday. “I see so many officers and different people of all races coming to see him, so he was a good man.”

Dorn’s sister, meanwhile, told KTUU-TV that she “can’t hate” her brother’s alleged killer “because I guess God won’t let me.”

“It’s still hard, you know. What I’m happy about, they caught the young man that shot my brother. But the bad part about it is, he’s 24 years old,” Christine McQueen said. “He’s taken my brother’s life … and he’s taken his own life too. He’s not going to have a life left. But I wish I could hate him, but I don’t. I feel sorry for him because he’s so young, and what he did.”

“His body is gone, but he’s still here. With me. So, that young man didn’t take everything because he’ll always be with me—he’s right here,” she added.

A private funeral for Dorn will be held 10 a.m. Wednesday at St. Louis Friendly Temple on Martin Luther King Drive, with only family, dignitaries, and police personnel in attendance.