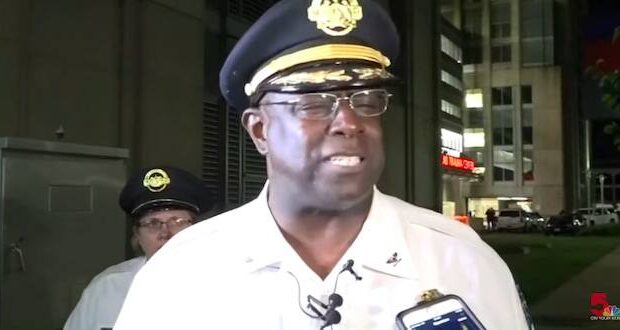 Protests began peacefully on Monday in St. Louis but some became, with rioters smashing windows and stealing goods from businesses, as well as sparking fires in the downtown area.

“We have had 4 officers struck by gunfire tonight. All have been transported to an area hospital. All are conscious and breathing. Their injuries are believed to be non-life threatening,” the department said in a statement.

We have had 4 officers struck by gunfire tonight. All have been transported to an area hospital. All are conscious and breathing. Their injuries are believed to be non-life threatening.

Officers are still taking gunfire downtown & we will share more info as it available. pic.twitter.com/Cwypi5EorP

“Officers are still taking gunfire downtown & we will share more info as it available,” the department added.

Protests have erupted over the past week across the nation since  George Floyd, died in the custody of a police officer on May 25 in Minneapolis. Disturbing video footage on the day showed a police officer using his knee on Floyd’s neck to pin him to the ground. Floyd, who was unarmed and handcuffed, pleaded to the officers while repeatedly calling out “I can’t breathe” during the episode.

Monday’s protests came after peaceful daytime protests on Sunday led to escalations of chaos overnight into Monday morning, with vehicles and buildings damaged, and officers firing tear gas after being pelted with rocks, fireworks, and Molotov cocktails.

But later in the day, a group of protesters gathered in front of police headquarters, leading officers to fire tear gas. Some protesters smashed windows at a downtown 7-11 store before looting it then setting the building fire. Moments later, a car was set on fire and other businesses broken into and looted.

Protests have also been reported in Kansas City and Jefferson City.

Earlier, Gov. Mike Parson (R) said in a statement on Sunday that the Missouri National Guard and the Missouri State Highway Patrol stand ready to protect life and property if violence persists.

“We are deeply saddened by the tragic death of George Floyd. We are also saddened by the acts of violence that have transpired across our nation and state in response to this event. At this time, we are taking a proactive approach to protect Missouri and its people,” Parson, a former sheriff, said.

“Violence and destruction are not the answers,” the governor added. “I support those who are calling for justice and peace. However, a small element has seized on these peaceful demonstrations to commit violent acts that endanger the lives of citizens and bring destruction to our communities.

“This violence not only threatens public safety and destroys economic opportunity; it drowns out the voices of the peaceful demonstrators calling for justice and working to improve our nation.”