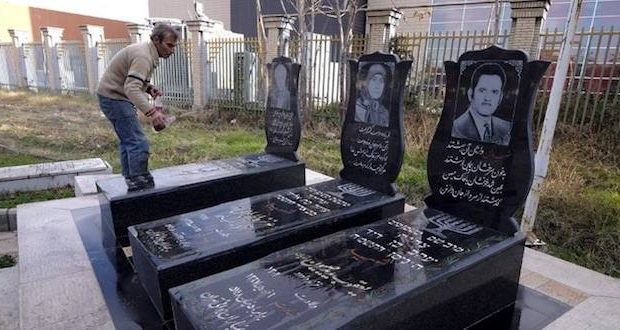 A man cleans gravestones from the graves of three Jewish Iranian soldiers killed in the war with Iraq. Photo: Video screen grab. 2015.

There is no love lost between Iran and Israel but a recent ceremony highlighted a little-known fact about Iranian Jews. Members of the Iranian Jewish community along with the Revolutionary Guards and Muslim clerics paid tribute to the Iranian Jewish soldiers who died during the Iran-Iraq war, reports Israel’s Mako news site.

During the ceremony, the Iranian Revolutionary Guard saluted during the recital of a Jewish prayer dedicated to the memory of the soldiers.

But it didn’t end there, as after the prayer, the feared Iranian soldiers helped clean the graves.

In 2014, Iranian authorities inaugurated a monument in memory of the Jewish soldiers killed in the Iran-Iraq war that was fought between 1980 and 1988.

According to a 2018 report by PBS, Iran has the Middle East’s second-largest population of Jews, with around 15,000 living there today. In Tehran, there are 13 active synagogues, five Jewish private schools, and several kosher restaurants.

The PBS report about Iran’s Jews was widely criticized for its glowing representation of safe and stable Jewish life in Iran, in stark contrast with the genocidal anti-Israel rhetoric Iran continually spouts.

According to a JTA article by Larry Cohler-Esses, a journalist who visited Iran and reported on the Jewish community for the Forward, “Iran accommodates some 9,000 Jews — according to the community itself — viewing them in a compartmentalized fashion as an age-old indigenous community totally separate from the malignant international forces of Zionism.

“The government may also see propaganda value in being able to point to the community’s continuing existence to international journalists. But Iran’s indulgence of its tiny Jewish minority doesn’t mean it wouldn’t wipe out Israel, the state of the Jews, if it could,” Cohler-Esses added.

In the Iranian parliament, there are five reserved seats for religious minorities. There are two seats for Armenians and one for each other minority: Jews, Assyrians, and Zoroastrians.

Dr. Siamak More Sedegh, the director of the Tehran Jewish Committee, is the current holder of the Jewish seat.

He is no friend of Israel. Sedegh said in a statement in May, “Jewish Iranians consider participation in [annual anti-Israel] Quds Day rallies as a national and religious responsibility… All walks of the honorable Iranian nation obey the orders of Supreme Leader of the Islamic Revolution, and will shout slogans against the U.S. and Israeli occupiers in a united and integrated manner,” reported Iran’s Fars news agency at the time.

It is not known if this was meant to shield the remaining Iranian Jews from becoming targets in the country.

With regard to actual equality for Jews living in Iran, the reality is a far cry from the version presented by PBS.

Speaking to that point, Cohler-Esses commented, “Under Iran’s sharia law code, different penalties are laid out for Muslims and non-Muslims for a variety of violations, almost always disfavoring the non-Muslims.

“The government also insists that each of the Tehran Jewish community’s five schools must be run by a Muslim principal — a requirement that the head of the Jewish community bluntly, and courageously, condemned on the record as ‘insulting’ in my 2015 interview with him. If a Jew murders a Muslim, the proscribed penalty is death. If a Muslim murders a Jew, the payment of blood money is an option,” Cohler-Esses explained.