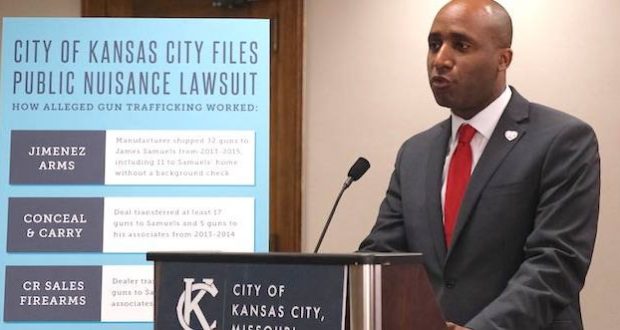 Kansas City Mayor Quinton Lucas has made reducing violent crime his top priority for 2020. He and the city council this week announced a lawsuit against a gun manufacturer for ignoring what he called illegal trafficking.

“There is a significant problem with illegal gun trafficking in our city” he said, “and while a lot of our criminal justice partners certainly try to make sure they root this out and address it, there are a lot of private actors that each day create new threats for the citizens of Kansas City, frankly for the citizens of our entire region.”

The public nuisance lawsuit is against at least three companies that shipped dozens of guns to one person without the required federal background check. The guns were sold to James Samuels, a former Kansas City Fire Department captain, who is now charged with federal gun trafficking. One of the firearms was used in a murder.

“Existing laws should be enforced,” he said, “and to the extent that those are not followed by actors, then there are harms thereafter and this legal action is saying those that are creating a public nuisance in Kansas City by not adhering to federal laws, those that have created public nuisances through their own negligence should be held to account in some way and should have to rectify and reform their practices.”

He promised to continue working with state leaders to reduce violent crime.

“I continue to believe that we need to enhance our Missouri public defender system,” Lucas said. “We need to have more funding for jailing and incarceration — not to build more jails — but to make sure that we are actually humane in our treatment of inmates in the state of Missouri. Those are things we are working, on and long term, certainly mental health, trauma treatment services, particularly for victims of shootings — and there were 480 of them in Kansas City, Missouri last year – is a key focus.”