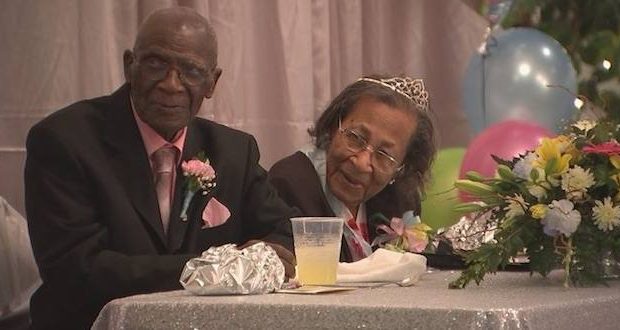 Willie Williams’ joy was palpable as she spoke about the first time she met her 103-year-old husband, Daniel W. Williams. At 100 years old, the devout Christian woman can’t remember all the details from the moment of their first meeting, but she knows that it’s the best memory she has of the man she’s been married to for the last 82 years.

She remembers they were at church. She was about 12 or 13. They were in Newberry, South Carolina.

“My best memory is when we first met,” she recalled from her Charlotte, North Carolina, home in a soft, warm Southern drawl in an interview.

“We met at church. I think we became friends and started talking to each other … that’s been such a long time,” she said.

A few years later when Willie turned 18 and Daniel was 21, the two would eventually marry. The exact details on how Daniel asked for her hand is also a bit fuzzy but Willie chuckled as she tried to imagine what he likely said.

“It’s been so long I forgot the exact words,” she said. “The only thing I could imagine he would say is ‘honey, would you marry me.’”

Daniel doesn’t hear so well these days but he remembers being struck by Willie’s beauty when they first met.

“Oh, I don’t know,” he said a bit reluctantly before blurting out “her beauty!” when asked about what first attracted him to his wife.

The couple who have lived through wars, the Depression, and the civil rights era, recently had an anniversary party at the First Mayfield Memorial Baptist Church in north Charlotte courtesy of their adoring family members. And Willie says despite their age, she and her husband are both “feeling fine thank you.”

“For our age I think we are [in very good health],” she said.

They still live independently for the most part. Willie cooks their meals and she gets help with cleaning, laundry, and groceries from her family.

As the years have gone by, says Willie, people from her community have sometimes reached out to them for advice on how they have managed to live so long together and their advice has remained the same.

“[They] want to know what we doing to have such a long life. And we try to just tell them, clean living,” said the devout Christian. 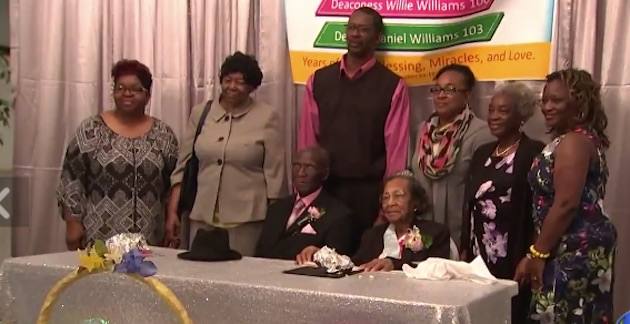 “Sometimes people will drink a lot and that’s not good for you. I don’t feel like drinking is a good thing for you,” she said.

When asked about her diet, Willie didn’t get very specific. She advises, however, that people should consume things that are good for their body.

“Just plain food, not too many rich foods,” she said of their diet. “We try to eat the right things. If you feel like its good for you, if you eat something and it doesn’t seem to do good for you, make you feel good, you don’t eat it anymore.”

She says for the most part, even if it’s hard to believe, she and her husband don’t take vitamins or are dependent on any medication to supplement their health.

The only medication beyond an unspecified pill taken daily that Willie admits to using on an as needed basis is Tylenol.

“Well, like Tylenol if you have a headache or something like that, yeah. You take that,” she said.

“If you mean we have to have a special type of medicine every day, we don’t do that. You don’t believe, but it’s the truth,” she said, laughing heartily.

Outside of attending church weekly and visits from family, Willie says she spends a lot of time with her husband every day and they enjoy a daily routine.

“Well, you get up and go out and get your paper. And we sit around the house and talk to each other. We have some sort of game or something we play,” she said. “We do [enjoy each other’s company]. We have been together so long, we do.”

The lifelong Baptists say their faith has been a big part of their longevity.

“We go to church every Sunday. That’s a must in our house. We must go to church. We were always taught to go in and it just stayed with us. Both of us go to church,” she said.

She insists that if people follow the Spirit of the Christian faith they would treat each other better and learn a lot more from each other.

“You know you always know how to treat people and do the right thing when you’re in church. To me, I would be different from the people that don’t belong to the church,” she said.

While she doesn’t have much to say about why some Christian marriages fail, she offered a bit of advice for Christians who are struggling in their marriage.

“Well, one thing, you must keep God in your life. You can’t go without Him now, you know. You’re supposed to have God in your life and you pray and ask Him the way,” she said.

Willie explained that when it came to dealing with challenges in her own marriage she couldn’t recall any major struggles because they understood how to communicate effectively with each other.

“Now, you want to know the truth? You may not believe. We haven’t had any rough times. We always sit down and talk about things. We sit down and both discuss it and see what was the best idea, the best way to deal with that,” she said.

She stressed that life is really simpler when couples try to work things out together.

And her husband agrees that good and open communication has been a major linchpin in the success of their union.

“If you see something go wrong [with your spouse] just tell them about it. That’s how I see it,” said Daniel.

“When you do the thing that’s right, stay out of trouble, and all that and you keep a clean life [things will all work out],” he said.

“Both of us worked. That was a must in our house. You’re supposed to work,” she said matter-of-factly.

She doesn’t believe in the concept of a housewife.

It’s been so long since they retired that she doesn’t remember how long it has been since they last worked to earn an income.

“Oh Lord, I can’t really tell you that,” she said. “I done forgot how long ago that was but it’s been some time since we worked.”

Willie also meditates a lot on the scripture Matthew 5:8 that says, “Blessed are the pure in heart: for they shall see God.”

“I like ‘blessed are the pure in heart: for they shall see God,” Willie said. “I’ve just always loved that scripture.”

Scholars at Got Questions explains that being pure in heart “involves having a singleness of heart toward God. A pure heart has no hypocrisy, no guile, no hidden motives. The pure heart is marked by transparency and an uncompromising desire to please God in all things. It is more than an external purity of behavior; it is an internal purity of soul. The only way we can be truly pure in heart is to give our lives to Jesus and ask Him to do the cleansing work.”

Asked if she believes her “clean living” could lead to many more years of life, Willie replied:  “I don’t know whether to say yes or no to that. I hope so.”