Home / Faith / Local Jewish writer on why she remembers the Holocaust 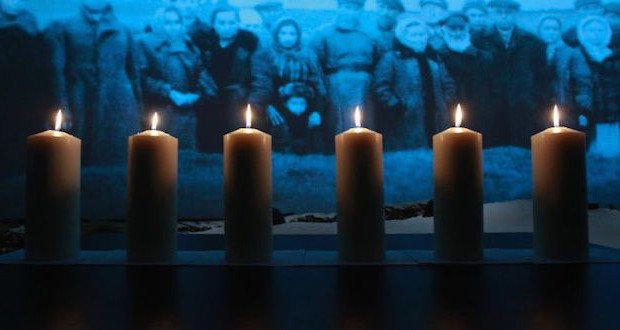 Local Jewish writer on why she remembers the Holocaust

Last spring, in anticipation of the first annual March of Remembrance, I was given the honor of interviewing Sonia Warshawski, a Polish Holocaust survivor. Below is an abbreviated version of the interview that appeared in Metro Voice that I posted on my blog.

“For I’m gon’ tell you,” says Sonia, a colorful and imposing presence at 4 feet 8 inches tall. “It happened slowly. Not all at once.

“The soldiers line up rabbis in the street and made us watch them rip out their beards by the roots. Then they shot them.

“Silence kills.” Her intense brown eyes dig trenches in my heart. “I tell you what is not in history books. As long as God gives me power, I will speak for them.”

This interviewer will never forget. 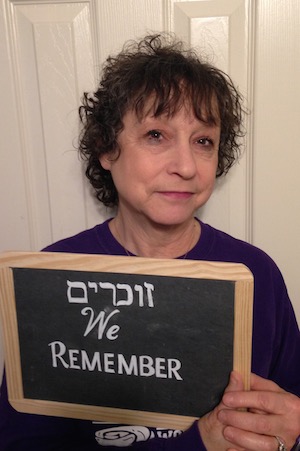 Rochelle Wisoff-Fields with a sign that hangs in her home.

Once more I’ve been asked to write an article or conduct an interview. Suggestions have been to speak with another survivor or, perhaps, the child of a survivor. Taking all of the suggestions into consideration I arrived at my decision to interview — myself––a Jewish believer in Yeshua. Am I meshuggenah? I’ll leave it to the reader to decide.

My grandparents, on both sides of my family, were born in Eastern Europe and immigrated to the United States to escape Czarist tyranny. Although their arrival in America predated Hitler’s rise to power, I grew up under the shadow of the Holocaust. I was born in Kansas City, Mo., just eight years after the liberation. The camps were fresh in everyone’s minds.

Some of my earliest remembrances include watching a documentary showing the horrors: the ovens, the barbed wire and emaciated bodies of the victims. My mother’s eyes blazed as she pointed to the television screen and said, “Never forget what they did to us.”

She told me many times about relatives my grandfather had tried to help escape. “We sent letters back and forth — then — nothing.”

When I see the photos in books of who perished, I often notice resemblances, and wonder if I’m looking into the eyes of my long-lost cousins.

“Never again,” I tell them.

In light of all of that I ask myself some of the same questions I asked Sonia last year.

Do you feel there’s too much emphasis on the Holocaust?

A resounding no! As the diminishing numbers of survivors age and die, I fear the memories are fading with them in the same way the pogroms of Eastern Europe are nearly forgotten. As much as I love “Fiddler on the Roof,” it’s a romanticized version of life in the Pale of Settlement. Could the same thing happen to stories of the Holocaust?

Will over 6 million souls fall between the pages of the abandoned annals of history? Let it not be so. People need to be reminded of the not all that distant past and Israel’s right to exist. This is why I feel that events such as the March of Remembrance are so important. I will be there with Israeli flag in hand and the Jewish Messiah in my heart.

Do you worry about anti-Semitism in America?

Do chickens have beaks? With the desecration of two Jewish cemeteries, one of them as close as St. Louis and threats on Jewish Community Centers around the United States, what’s not to worry about?

If you were to speak to the Church today concerning anti-Semitism, what would you tell them?

The Church has not replaced Israel as His chosen. The Almighty, the God of Abraham, Isaac and Jacob made an everlasting covenant with the Jews. Unless I misunderstand the meaning of “everlasting” that covenant hasn’t ceased nor has it been negated. While grafted-in Gentile believers are precious and equal in the eyes of the Lord, the Jews are still, and forever will be, the apple of His eye.

Is there anything you’d like to tell the next generation?

Philosopher and novelist George Santayana said, “Those who cannot remember the past are condemned to repeat it.”

We must never forget. There are plenty of deniers who claim the Holocaust never happened despite the overwhelming evidence that it most certainly did. Why would millions of Jewish people tattoo their arms or stage photographs to proliferate a hoax?

Four years ago, Iranian President Mahmoud Ahmadinejad publically claimed there had been no Holocaust. Naturally, Israel’s enemies are ready and willing to believe it.

A young African American friend of mine asked me one day, “Did the Holocaust really happen?”

To which I answered, “You tell me. Did slavery in America really happen?”

Editor’s Note: This year’s March of Remembrance will take place Sunday, May 7 at the Overland Park Convention Center. For more information and a schedule of events visit metrovoicenews.com. 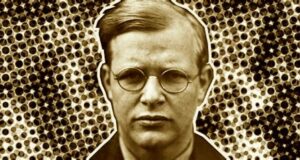 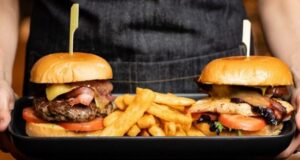 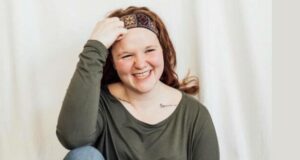 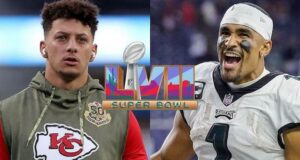