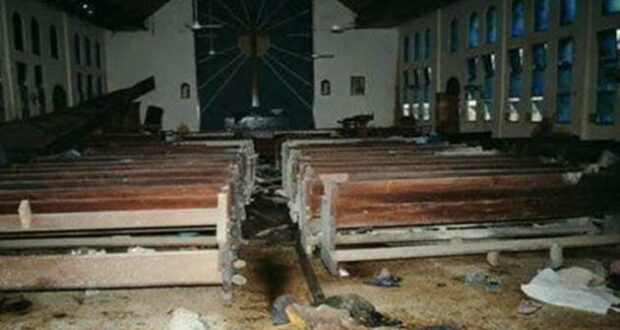 The man who orchestrated a massacre of hundreds of Liberians in a church can be held accountable under U.S law a federal judge has ruled.

Military commander Moses W. Thomas was central to the torture and slaughter of Christians and other civilians in the country’s civil war in 1990. The ruling relates to actions taken by Liberia’s military against Christians seeking safety at a Red Cross shelter at St. Peter’s Lutheran Church.

The judge ruled on behalf of four anonymous survivors of the military assault. The lawsuit said Thomas commanded soldiers to fire into the packed church from the front door and on all sides through windows.

The survivors shared details of the grisly attack in which they hid under dead relatives and neighbors to survive. Some, clinging to bibles, smeared blood on themselves to appear dead as they hid behind the pulpit.

“He oversaw the events and only declared an end to the shooting when he understood the occupants of the church to have been all killed,” wrote U.S. District Judge Petrese Tucker.

Tucker detailed the plaintiffs’ loss of family and friends and stated they suffered “serious, prolonged physical and mental harms as a result of the massacre.”

Thomas emigrated to the United States after the war, working at a restaurant in a Philadelphia suburb. He returned to the war-torn country two years ago according to his attorney.

The judge also said he may be prosecuted for war crimes and crimes against humanity.

Thomas had unsuccessfully argued too much time had elapsed to file the lawsuit under the 1992 federal Torture Victim Prevention Act and claimed he had never been to the church. Kannah said Friday that Thomas maintains he is innocent of the allegations.

Since the case was initially filed on February 12, 2018, the movement for a war crimes court in Liberia has grown rapidly to include a coalition of close to 80 international and regional NGOs urging President George Weah to take action. The Trump administration also convinced the United Nations Human Rights Committee to call on Liberia to prosecute perpetrators of civil war atrocities.

Previous: Conception Abbey welcomes you as Christ
Next: YouVersion Bible, illumiNations set ambitious goal to provide translations to 95 percent of world by 2033