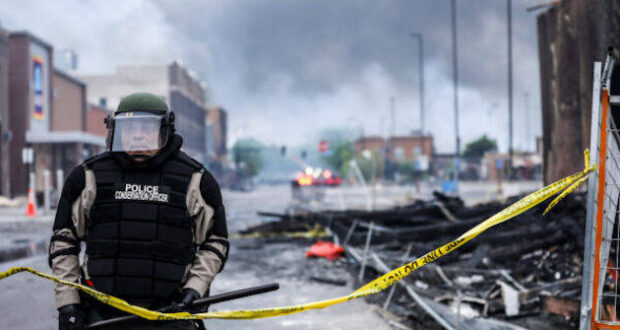 A police officer stands amid smoke and debris as buildings continue to burn in the aftermath of a night of protests and violence following the death of George Floyd, in Minneapolis, Minn., on May 29, 2020.

After telling President Donald Trump he did not need help dealing with rioting in Minneapolis, the state’s Democrat governor now wants millions in taxpayer money to clean up the destruction and rebuild.

Gov. Tim Walz on July 2 asked President Trump to declare a state of disaster due to the “extensive fire damage to public infrastructure caused by civil unrest” following the death of George Floyd.

More than 10,000 public safety officials contributed to the effort to restore peace and safety amid the protests, which erupted following the death of Floyd.

The often violent and chaotic protests left business and vehicles engulfed in flames, including the police department’s Third Precinct building, which was torched and abandoned. After public criticism of the Democrat mayor and governor’s response, The Minnesota National Guard was finally mobilized for the first time since World War II in an effort to contain the protests, many of which sparked looting.

In his statement on Thursday, Gov. Walz said more than $15 million of eligible damages related directly to the fires, a preliminary damage assessment found, while nearly 1,500 businesses in the Twin Cities were damaged by vandalism, fire, or looting. Walz estimates the cost of damages currently exceeds $500 million.

“We’re asking our federal partners to step up and help our communities recover,” Governor Walz said in a statement. “We need to come together to ensure Minnesotans who were victims of this destruction have access to critical infrastructure they need so they can go to the grocery store, pick up their medication, and live their lives.

“Together, we will rebuild.”