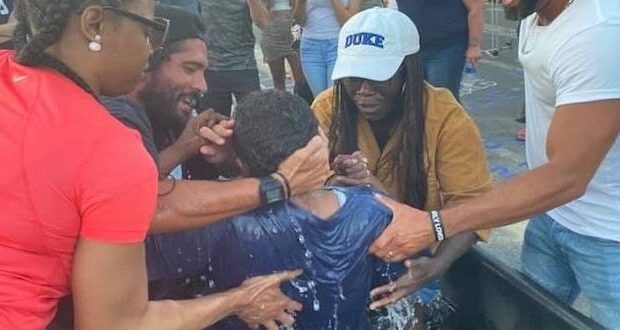 The world has witnessed violent clashes involving looting, murders, and hundreds of businesses burned. But the vast majority of people have participated in peaceful demonstrations following the death of George Floyd and now, amazingly, protesters are being baptized where it happened.

Testimonies of faith and love among Christian brothers and sisters, reveal that Christ can unify hearts, no matter the color of the skin.

Now the streets of Minneapolis where Floyd was killed have become the site of an outpouring God’s love and salvation as hundreds of people have gathered to glorify God through worship, evangelism, and and opportunities to be baptized.

Videos and photos of this move of God have been posted across social media. Joel Bomberger, a preacher with Circuit Riders, shared an image of a baptism that occurred on the street while bystanders cheered during the joyous occasion.

“A team of our Circuit Riders went to Minneapolis to hold open-air preaching of Jesus and healing calls at the intersection where George Floyd was killed,” Bomberger reports. “There are too many testimonies to recount!! They were able to preach to thousands and saw hundreds responding to the Gospel of Jesus!!”

He also reports, “Dozens and dozens of people healed, filled with hope, changed, and born again by the power of Jesus this weekend in Minneapolis!”

“Just got a text that a deaf ear was just opened by the power of Jesus! Praise God!” Bomberger says.

Team members from the ministry Circuit Riders traveled to Minneapolis to hold outdoor services where hundreds of people have prayed aloud and worshipped together.

Words of affirmation echo throughout the street corners as believers have declared their commitment to Jesus Christ.

One video shows a street preacher leading the crowd in a salvation prayer saying, “I believe that You rose again, defeating life and defeating death. I give you my life. The Holy Spirit…lead me, guide me, show me the fullness of what it means to follow You, in Jesus’ name, Amen.”

Brandon Marlow tweeted pictures of people praying together and embracing one another as a symbol of unity.

Prayer, worship, and baptisms happening on the streets of Minneapolis. #OnlyJesus pic.twitter.com/9OpftoULgY

Even though hearts are still reeling from the injustice done to George Floyd, the Gospel of Jesus Christ is advancing as many are finding solace and salvation in a Heavenly Father who brings hope and healing.

Previous: ‘Wretched’ may be #1 but family films rule theater-free season
Next: ‘Napalm girl’ in famous Vietnam War photo: ‘Those bombs led me to Christ’