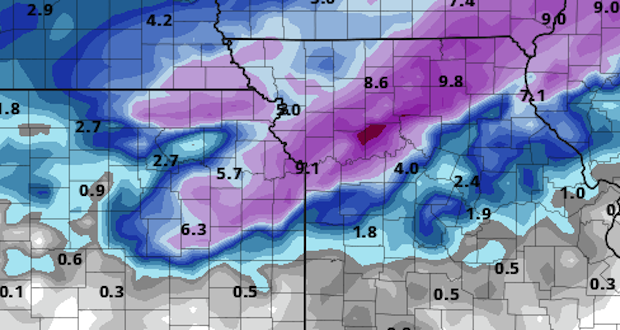 Kansas City could be in the bullseye for a major winter storm on Sunday.

The National Weather Service has issued a Winter Storm Watch for the entire region on Sunday from 6 a.m. to 9 p.m. as rain is expected to change to snow early in the morning.  Areas north of Kansas City will see the changer-over sooner with cooler temps to the north already in place. The National Weather Service in Pleasant Hill says snow will fall steadily through the day with snowfall rates of more than an inch an hour in heavier bands.

The heavier snow is expected to be north of Kansas City at this point but as new forecast models are released, forecasters are looking for signs the storm will shift south over the metro region. One computer model of the storm has Kansas City getting hammered with 9 inches.

Wishful thinking to some but even lighter amounts could be a problem. Even with just 3-5 inches of snow across the region, sustained winds are expected to be 20-30 mph with gusts to 40 mph which will lead to whiteout conditions at times and dangerous travel across the area.

The storm system is just now coming into meteorologists observation network across the Pacific Northwest, so there is still plenty of time for the location of heaviest snow to change.

If the Weather Service upgrades it to a storm warning it would be the first time in 1,061 days that a winter storm warning has been issued for Kansas City. That’s a long time in terms of winter snow for the area.

Chief meteorologist Gary Lezak, with KSHB41 Weather, says latest models have KC in the sweet spot for a big storm but it is still too early to know exactly. “This is still SUSPECT however, and we will see if the other models come up with similar solutions on the track of this system,” Lezak wrote on his weather blog.

Weather forecasters are now saying that Sunday travel is discouraged. If the forecasts hold true, it will have been decades since a winter storm hit the area on the first Christmas shopping weekend after Thanksgiving.

Previous: Jim Brickman shares why he loves Christmas music and his roots
Next: ‘My Pillow’ inventor donates $1 million to pro-life film