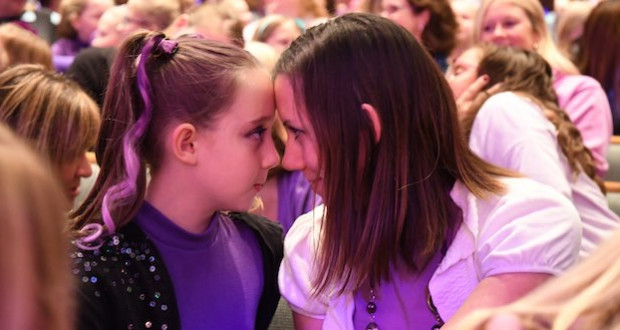 Is “princess culture” harming young girls? Research featured in The Washington Post in 2016 indicates it is. As the Post wrote, the princess culture “suggests that a girl’s most valuable asset is her beauty, which encourages an unhealthy preoccupation with physical appearance.”

Moms of tween girls probably understand this better than researchers, and many, especially Christian moms, are looking for resources to help them get ahead of the cultural pressure on their girls.

“When our daughter was about to enter middle school, my husband and I wanted to be proactive in our conversations about self-image and modeling of self-confidence, Godly character, and modesty,” says Overland Park mom Lori Andersen.

One of their favorite resources was Secret Keeper Girl, a national touring stage show aimed at tween girls and their moms. The tour, which is coming back to the Kansas City area on Saturday, March 25, was created by best-selling Christian author Dannah Gresh.

Gresh has long built a case for teaching age-appropriate modesty by pointing to the fact little girls who are exposed to products and marketing that promote sexuality are more likely to experience depression, body image issues and an early sexual debut as teens. She claims it’s not the concept of being a princess, but “princess-driven” marketing that harms girls.

“Being a princess is not bad,” says Gresh, adding the princess culture isn’t going to go away, so parents need to redefine what it means. “We have many modern princesses who devote their lives to charitable causes, but spend very little time in a ball gown and tiara. They use their royalty to serve others.”

“Our bodies aren’t bad and neither is being beautiful,” she says. “As moms, we need to define princess so that a girl understands her value but doesn’t make too much of herself. This gives her what we call body confidence, making her aware of her body’s purpose and value, while empowering her to be a protector of others.”

The lessons girls hear during the show attack the lies that their most valuable asset is their beauty and strongly asserts that each girl is a masterpiece created by God.

“We loved it!” Andersen said of a previous tour she attended with her daughter. “It gave Ava confidence to be herself and gave me encouragement and guidance on how to approach fashion and pop culture with her from a Christian perspective.”

Andersen and her daughter are one of more than 350,000 attendees of Secret Keeper Girl’s annual tours in America and Canada.

Kristi DeMint, a Lenexa mom, is another. She agrees the lessons her daughter learned at the show helped build her self-confidence, especially when her daughter was asked to be a clothes model during the fashion show.

“They (the Secret Keeper Girl team) made being different seem cool and okay instead of joining the crowd,” DeMint says.

The Secret Keeper Girl Purple Party Tour show will take place at 3:30 pm, Saturday, March 25, at Nall Avenue Baptist Church in Prairie Village. Tickets are $15 each and can be purchased at www.secretkeepergirl.com.