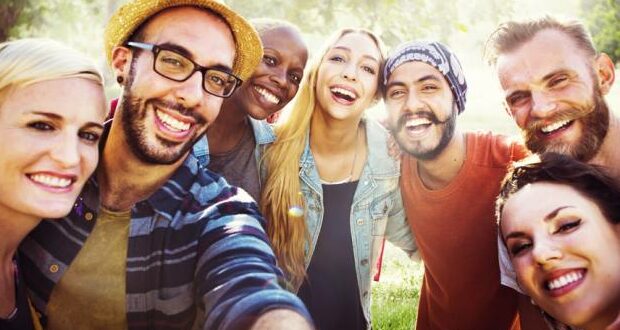 Young and secular are least vaccinated, not Evangelicals as media reports

(ANALYSIS) As the delta variant has caused COVID-19 to surge again in the United States, there’s been a flurry of attention paid to the share of Americans who have chosen to forgo the vaccine against the coronavirus. Trying to understand the causal factors that would lead to one not getting vaccinated seems to be the first task when it comes to understanding vaccine hesitancy of young and old, religious and non-religious.

One of the primary dimensions that news outlets seem to be focusing on is religion. The headlines are published nearly weekly – evangelical Christians are the ones who are the most reluctant to receive the COVID-19 vaccine. Yet, when I review the data from a survey that was conducted on May 11, 2021 that was administered by Data for Progress, I don’t find a lot of evidence that evangelicals are the ones lagging behind. In fact, I find that those without any religious affiliation were the least likely to have received at least one dose of any COVID-19 vaccine. 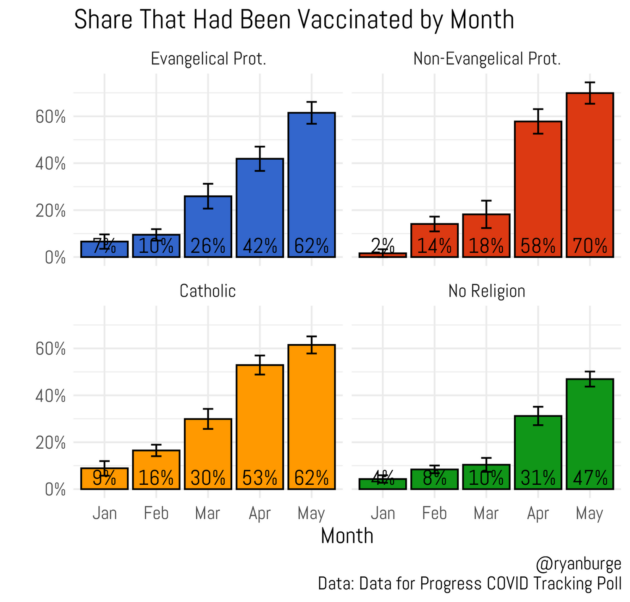 The Data for Progress poll has been in the field for a total of 57 weeks. Dating back to the earliest days of the pandemic and beginning in January, respondents were asked if they had received a COVID vaccination. Obviously, in those early days when vaccine supply was an issue, small fractions of the population had gotten a shot. But that quickly ramped up as larger shares of the population became vaccine eligible.

By May, 70% of non-evangelical Protestants had gotten at least one dose. Sixty-two percent of both evangelical Protestants and Catholics reported the same. However, it was the “nones” (no religious affiliation) who were lagging farther behind. By May 11, only 47% of nones had reported receiving at least one dose. However, what complicates data surrounding vaccination is that not everyone was eligible to get the shot at the same time. In all states, the oldest residents were eligible first and then the criteria widened as demand waned. However, by May 1, every American who was at least 16 years old was eligible to receive the vaccine. 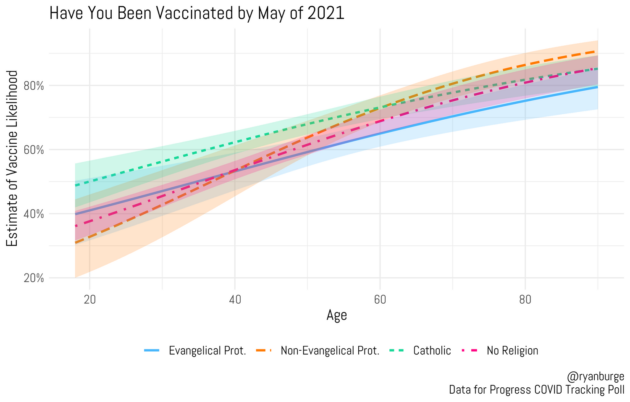 To take into account the nature of the vaccine rollout, I built a regression model that contained a number of control variables including race, income, education, gender and age. The results of that model indicate that when those factors are controlled for, there is no statistically significant difference in the likelihood of vaccination among different religious traditions. Or said another way: holding things constant, a 30-year-old evangelical is no more or less likely to have gotten the vaccine in early May as a 30-year-old none.

However, there’s still another question looming – are the people who have decided to forgo the vaccine likely to ever get the jab? The survey asked those people who said that they haven’t received the vaccine how likely they would be to get it. Response options ranged from “very likely” to “very unlikely.” This data paints a grim picture about the likelihood of significantly increasing vaccination rates. 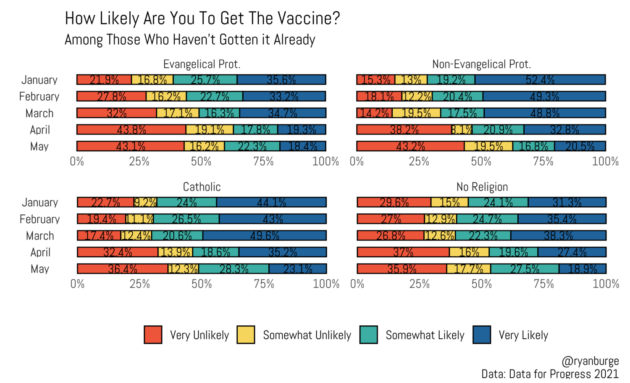 For instance, in January the share of evangelicals who said that they were “very unlikely” to get the shot was just 22%. By May, it had nearly doubled to 43%. That same pattern is even more pronounced for non-evangelical Protestants (15% to 43%). In essence, those who are holding out now are even more committed to their position of abstaining from any COVID vaccine.

It’s interesting that among those who claim no religious affiliation, the share who are “very unlikely” has only increased modestly – from 30% in January to 36% in May. This may represent a number of factors – one being the stark age difference between the nones and Christians. It’s clear that younger people have always been less likely to roll up their sleeves, so this may be a bigger barrier for nones to get the shot than it would be for evangelicals. It’s possible with the added threat that is coming from the delta variant, that this may move a lot of young nones off the fence and into the vaccine clinics.

I understand that this data seems to contradict some of the other polling results that have been released by other polling agencies. I cannot speak to why these results do not line up with those other findings. However, I can say that if this data is accurate, that the media needs to be turning the spotlight a bit away from evangelicals and toward the vast swaths of America that is young and secular. Getting this group to get vaccinated may be the key factor in beating back the rising tide of cases that are threatening the lives and livelihood of millions of Americans every day.

– Ryan Burge is an assistant professor of political science at Eastern Illinois University, a pastor in the American Baptist Church and the co-founder and frequent contributor to Religion in Public, a forum for scholars of religion and politics to make their work accessible to a more general audience. His research focuses on the intersection of religiosity and political behavior, especially in the U.S. Follow him on Twitter at @ryanburge. Reprinted from ReligionUnplugged.

Previous: Lessons from Roman historian Livy on the rise and fall of nations
Next: ‘Smiles for America’ honors police, first responders for 9/11 anniversary