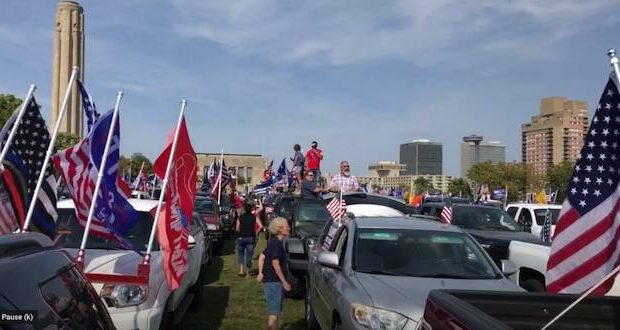 Thousands of Kansas Citians turned out on Saturday for a Trump Parade from Liberty Memorial to the Country Club Plaza.

The local Public Radio station KCUR, which along with the Kansas City Star has been criticized for biased reporting, were the only local news organizations to report numbers in the hundreds while all three television stations reported numbers in the thousands. Over 10,000 people had signed up via Facebook to attend. Video taken from the air and on the ground indicates that thousands did attend.

The parade included a flyover of planes (video below) which drew cheers from attendees. A video (below) taken by a retired police officer captured the moment drivers of all races honked their support for the effort as they drove past.

Brian Zern of Independence and his wife were on a date in Kansas City when they saw the rally, which he said was like a boat party in Branson, and decided to join. He said the turnout was “a lot more than I expected” and that he thinks “everybody else sees the same thing” he does with Trump.

“I just don’t like the fact that it feels like the Democratic side is more government,” he said. “It is, you know, a lot more regulations, more control. I think at least on the Trump side, it’d be a little less government and a little bit more for the people.”

Looking at the turnout at the Liberty Memorial, Charlie Pogue of Olathe said he underestimated Kansas City. “I’m here just to show the support, make sure people know there’s a lot of Trump voters out here,” he said.

Posted by Kansas City for Trump on Saturday, September 26, 2020

His daughter, 17-year-old Julia, can’t vote in November, but she wanted people to know young people need to be heard.

“I know a lot of the time, people assume that the younger generation is mostly Democratic,” she said. “But I think, especially being a woman, it’s important for me to know that there’s lots of people out there who are with me and just show my support.”

Both father and daughter said the main issues for them this election were gun rights, abortion and the economy.

Trump, or “MAGA”, Parades have become a modern phenomenon across the nation. Most major cities, including Portland, have seen supporters of the President come out by the thousands. The parades, while most often of the four wheel kind, have also occurred across the country’s lakes and shorelines. A parades have been organized on the Lake of the Ozarks as well as Truman Lake in Missouri as well as the coasts of Florida, California and other states.

A parade organized recently by Joe Biden supporters in Delaware drew 12 vehicles and a golf cart.