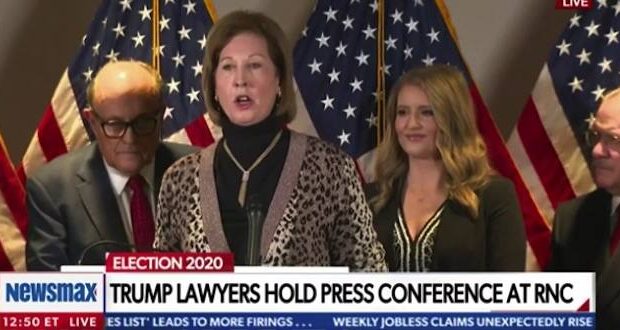 The Trump campaign’s lawyers include not only Giuliani but also respected attorney Sidney Powell who served as an Assistant United States Attorney for 10 years and She is now practicing in the Second, Fourth, Fifth, Ninth, Tenth, and Eleventh Federal Circuits, and the United States Supreme Court.  Powell also consults in federal appeals and litigation involving complex class actions and selected “white-collar” defendants, including the $3 billion national class action against Fibreboard Corporation; real estate transactions, employment law, asbestos injuries, environmental issues, oil and gas matters, contract claims, patent, trademark, copyright, attorney sanctions, civil rights actions, and a wide variety of civil issues. Powell has served as lead counsel in more than 500 appeals in the Fifth Circuit, which have resulted in more than 180 published opinions. Ms. Powell is an elected member of the American Law Institute and a Fellow of the American Academy of Appellate Lawyers for which she served in 2001-2002 as President.  She is also a past president of the Bar Association of the Fifth Federal Circuit.

Trump is also represented by Lin Wood who most recently won several high-profile settlements against the Washington Post and CNN. He is perhaps most notably known for his representation of Richard Jewell who was wrongly accused of the Atlanta Olympic bombing. Wood’s resume in winning civil cases against media outlets and mega corporations is so long we link to it HERE.

Current allegations made by the Trump Campaign: