Home / News / Ukraine president: ‘There was no blackmail’ 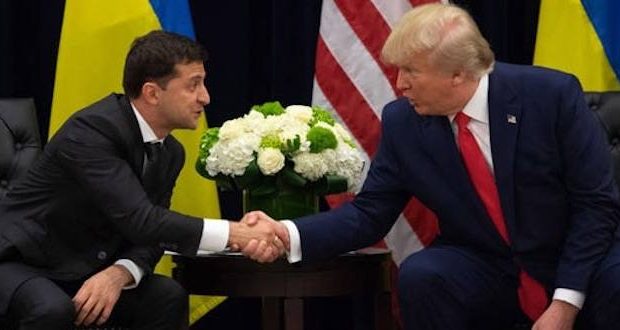 Ukraine president: ‘There was no blackmail’

The president of Ukraine is rebutting false news reports that assert President Trump used blackmail during the phone call now at the heart of the Democrats’ presidential impeachment inquiry.

President Volodymyr Zelenskiy told reporters in Kyiv, “There was no blackmail. We are not servants. We are an independent country.”

“I think that this is not corruption, because it was just a call.”

The July phone call showed Zelenskiy as eager to please the United States and critical of European countries whose support he needs to strengthen Ukraine’s economy and to end the conflict with Russia.

Zelenskiy said it was “wrong” of the White House to publish a rough transcript of the call and he will not publish the Ukrainian transcript.

Trump has said the United States has an “absolute right” to ask foreign leaders to investigate corruption cases. The president’s contention is upheld by U.S. treaty with Ukraine that was signed in to law by former President and Democrat Bill Clinton. That treaty allows the President of the United States to initiate investigations and work in conjunction with Ukraine to uncover and confront corruption in the fledgling democracy.

Ukraine’s top prosecutor last week said his office would review several cases related to the owner of the gas company where former Vice President Joe Biden’s son Hunter Biden sat on the board. Biden was paid $600,000 for the gig even though he had no experience in either foreign policy, international business or energy production. Biden also garnered over $1 billion in financing immediately after he accompanied then Vice President Joe Biden on a trip to Communist China. The money came from companies owned by the People’s Communist Party.

The U.S. media continues to drag its feet in investigating either transaction, choosing instead to focus on the phone call between two world leaders. Political scientists say that the phone call should not be used as the basis of an impeachment.

Zelenskiy on Thursday invited US and Ukrainian prosecutors to cooperate but insisted he would not interfere.

Declaring in a tweet that the Ukrainian president’s defense exonerated him, Trump said, “that should end this Democrat scam, but it won’t, because the Dems & media are fixed!”

This news comes as Fox News released a questionable poll that contends a majority of Americans favor impeachment. As Metro Voice reported, the poll used high questionable data in that its sample included almost 50% being registered Democrats instead of the 31% which is confirmed by Gallup and voter registration records.