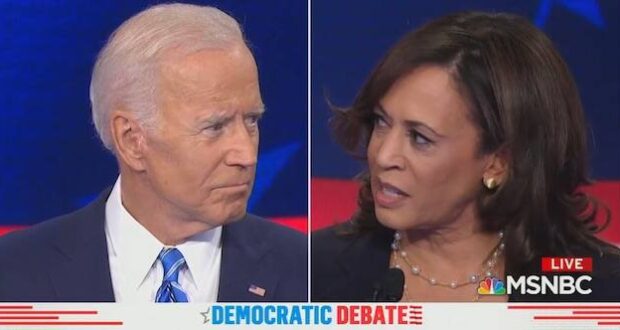 Joe Biden announced Thursday that Sen. Kamala Harris (D-Calif.) will be his running mate for the 2020 Democrat ticket for president. The Democrat convention is expected to make it official even as Bernie Sanders supporters say they will not support Biden.

“I have the great honor to announce that I’ve picked [Harris]—a fearless fighter for the little guy, and one of the country’s finest public servants—as my running mate,” he wrote in an announcement on Tuesday.

“I’m proud now to have her as my partner in this campaign,” Biden stated.

With just six days until the nominating convention, Biden was expected to choose a vice president this week.

Before becoming a senator from California, Harris was the state’s attorney general and San Francisco’s district attorney before that. She also unsuccessfully ran to be the Democrat nominee before dropping out as she remained near the very bottom of the polls.

Biden’s selection of Harris, 55, is viewed as an attempt to appeal to a broader spectrum of the Democrat Party. Harris’s mother immigrated to the United States from India in the 1960s, while her father Donald Harris, originally from Jamaica, is an economist who worked for Stanford University in the Bay Area and a self-avowed staunch Marxist.  In debate after debate, Harris said Biden’s record was one of supporting racists, and racist policies.

The pick, of course, means that Harris would take over as president if Biden, 77, suffers a health issue while in office. Earlier this year, Biden told reporters that “I’m an old guy,” and he would need someone who could “immediately” take over. A poll released this week finds half of Democrat voters expect Biden to die during his first term should he win in November.

Biden, who many believe is showing signs of onset dementia, claimed in January he was healthy. “I’m in good shape—knock on wood, as my mother would say,” he said in January of this year.

Notably, Harris was a co-author of the Democrats’ police reform legislation in the Senate but was attacked during the Dem debates for having sent thousands of first-time marijuana offenders to prison. A fact that continues to plague her in the African-American community.

“Not long ago, Kamala Harris called Joe Biden a racist and asked for an apology she never received,” Trump spokesperson Katrina Pierson said in a statement on Tuesday.

“In her failed attempt at running for president, Kamala Harris gleefully embraced the left’s radical manifesto, calling for trillions of dollars in new taxes and backing Bernie Sanders’ government takeover of healthcare,” Pierson remarked, adding: “She is proof that Joe Biden is an empty shell being filled with the extreme agenda of the radicals on the left … At the ballot box, Americans will resoundingly reject the abysmal failures of Biden-Harris in favor of the America First strength of President Donald Trump and Vice President Mike Pence.”

Biden, who spent eight years as President Barack Obama’s vice president, has spent months weighing who would fill that same role in his White House. He pledged in March to select a woman as his vice president, easing frustration among Democrats that the presidential race would center on two white men in their late 70s.

Previous: No results on election night? Get ready, says Federal Elections Commission
Next: Majority of Americans – including Christians – believe they can earn salvation