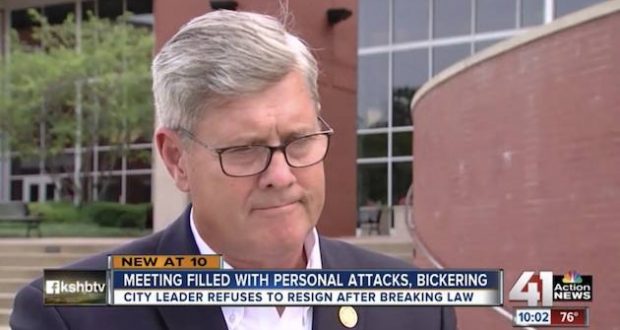 Tom Lovell lacks the coveted Republican primary credentials of an endorsement by Missouri Right to Life and an AQ Rating from the National Rifle Association. That’s not good in a conservative district. Lovell’s primary opponent, Sean Smith, has exclusively garnered both in the race for the open seat in the District 35 of the Missouri House of Representatives.

However, much more serious questions have been raised about Lovell’s candidacy and ethical fitness to serve in public office. In addition to breaking state ethics laws, allegations have arisen by women concerning sexual harassment. Lovell’s own words describe himself in an email as a ‘lecherous old man’ staring at women he identifies as “hotties” at a party hosted by a Lee’s Summit City Councilmember.

That email, as well as others obtained by Missouri Sunshine law request, was sent from Lovell’s former official email account while he served as Lee’s Summit Director of Parks and Recreation until his resignation in 2017.

Missouri Republican officials privately express concern that if Lovell were to win the primary, he would not withstand the scrutiny that would follow him to win a general election for the 35th District, which Democrat Party officials have made a top target in November.

While Smith holds a large financial advantage of cash on hand for his candidate campaign with over $81,000 reported 8-days before the primary, Lovell reported just over $16,000 cash on hand after loaning his campaign $10,000 last December. However, a quick review of his 8-Days Before Primary campaign finance report shows a huge discrepancy.

Were he to win the primary, Lovell would face questions on this and more regarding his campaign finances. On June 18, the Missouri Ethics Commission filed a consent order, ruling against an appeal by Lovell made by an attorney on his behalf. According to the consent order, Lovell made a $10,000 contribution in the form of a loan to his candidate committee on December 4, 2017.

Missouri law requires that all contributions to campaign committees over $5000 be reported to the Missouri Ethics Commission within 48 hours. According to the consent order, Lovell’s campaign did not report the contribution until March 6, which the MEC findings stated made Lovell’s candidate committee liable for a $900 fine based on the statutory fine of $10 a day for violations of that state campaign finance law.

Although Lovell appealed the fine in a hearing before the Missouri Ethics Commission on May 23, represented by Mike McCormick acting as an attorney for Lovell, the Commission action was upheld. McCormick’s services have not been reported on Lovell’s July quarterly campaign finance report or his 8-Day Before Primary report. According to the Missouri Ethics Commission, state campaign finance law requires that such services either must be reported as an expense, if paid, or as an in-kind contribution.

In the days before the August 7 election, more campaign finance questions have remained to be answered by Lovell. His committee has sent two mailings received in mail boxes in District 35 in the last 7-days and he began an advertisement on an electronic billboard today, August 6th.

Lovell’s first mailings was not reported on his 8-Days Before Primary report that was filed on Friday, July 27 for activity through Thursday, July 26. If his first mailing was in mailboxes by Monday, July 30, the question remains when was printing for that mailing paid for and when was the postage paid? Missouri campaign finance law requires such expenditures be reported as incurred or paid.

Further questions remain for Lovell as to how his first and second mailings and the billboard were paid for when his committee has not reported any contributions received of over $250 since his 8-Day Before primary report, which state law requires be done within 24-hours within 8 days of the primary. If his committee actually only had $7,239.58 on hand as of July 27, how were two district-wide mailings and a billboard paid for with only that much money on hand? These are questions Lovell will have to answer if he wins the primary.

Lovell has also faced unsubstantiated, but repeated allegations of sexual harassment dating back to his time in which he served as Director of the Lee’s Summit Parks and Recreation department.

In a letter to the Editor of the Lee’s Summit Tribune newspaper, Karen Banks, who says she was an accountant for the Lee’s Summit Parks Department from 2006 to 2009, alleged that her workplace was “a sexually harassing and hostile work environment.”

She further claimed in the letter to the Editor that she presented supporting documentation to the Board of Directors for Lee’s Summit Parks and Recreation, but said her “plea for help went unanswered and they did not pursue the truth.” Banks has provided dozens of pages of supporting documentation to the Lee’s Summit Tribune to support her claims.

See letter to the Editor of the Lee’s Summit Tribune here: lstribune.net/index.php/2018/07/27/do-not-vote-for-tom-lovell-state-representative/

Several posts on Facebook by Lee’s Summit residents and even a former Lee’s Summit City Councilmember make repeated allegations of wrongdoing by Lovell, including ordering and directing no bid contracts in violation of State law,

In 2016, a year before Lovell resigned as Director of Lee’s Summit Parks and Recreation, Channels 41 and 4 both did extensive stories about no bid contracts in which Lovell was involved and that were confirmed by emails obtained via Missouri Sunshine Request laws.

Lovell never faced adjudication for his alleged involvement, but a sitting City Councilmember was fined and entered into a consent order as an admission of guilt. A motion followed in the Lee’s Summit City Council to remove her from office and that motion ended in a tie vote with the former Mayor breaking the tie, which allowed her to stay in office.

In another email obtained by Missouri Sunshine request law, Lovell wrote in 2016 on his official municipal email account to a sitting City Council member. She was fined by the Missouri Ethics Commission for her involvement in no bid contracts in violation of state law and entered into a consent order in 2016.

Another email obtained by sunshine request showed a secretary to Lovell saying he wanted bids to go through that Councilmember, implying his potential complicity in violation of state law requiring open bidding on public contracts.

While serving as Director of Lee’s Summit Parks and Recreation until 2017, Lovell wrote in an email from his former official public email account, “Great party, but [Name Redacted] and I were going to get in trouble if we had stared one more time at one of the many hotties running around your house. It was a danger zone for lecherous old men.” The party in question was held at the home of the above mentioned City Councilmember who was nearly removed from office.

Lovell’s description of himself as a ‘lecherous old man staring at hotties’ concerns women queried by the Metro Voice who do not wish to be identified for this story. They question if Lovell is the kind of man they want representing their children and families in Jefferson City.

While Smith is considered the front runner heading into the August 7 primary and does not appear to carry any apparent baggage, like Lovell allegedly may, many Republican insiders are concerned about Lovell’s candidacy.

They worry if a primary win by him could become a drag for other Republican candidates and the Republican Party in November after the fallout following former Governor Eric Greiten’s resignation following allegations of moral failures and alleged violations of state laws.

Many Republicans, including sitting state legislators, say they are expecting and hoping for a win by Sean Smith Tuesday night to avoid potential scandals that could follow through November 6 if Lovell wins the primary.