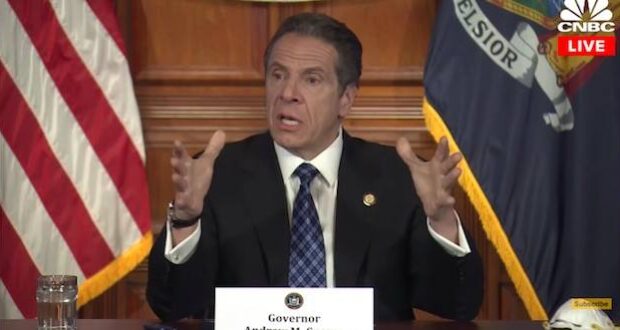 New York Gov. Andrew Cuomo said that President Donald Trump was right to question the World Health Organization (WHO) for its handling of the COVID-19 pandemic.

Speaking at his daily briefing on the coronavirus, the novel coronavirus that causes COVID-19, Cuomo said the Trump administration, which has frozen WHO funding, should get to the bottom of whether the United Nations agency in any way failed to execute on its mission.

“Whose job is it to warn of us of these global pandemics? The president says it’s the World Health Organization, and that’s why he’s taken action against them,” Cuomo said at the briefing.

A WHO rule for member countries is that they need to report outbreaks of new illnesses within 24 hours. Another is that the WHO’s chief has the ability to make public any information about a member country flouting the rules.

After freezing WHO funding last week, Trump announced an investigation, accusing the agency of “severely mismanaging and covering up” the spread of the virus in the first days of the crisis.

“They called it wrong. They missed the call. They could have called it months earlier. They would have known. They should have known. And they probably did know. So we’ll be looking into that very carefully,” the president told reporters in Washington earlier in April.

“It’s not my field but he’s right to ask the question, because this was too little, too late,” Cuomo said at his briefing. “And let’s find out what’s happened so it doesn’t happen again — and it will happen again. Bank on it.”

Secretary of State Mike Pompeo said at an April 22 briefing that U.S. officials “strongly believe the Chinese Communist Party did not report the outbreak of the new coronavirus” within the 24 hours required under WHO policy. Even after it did notify the WHO, it withheld information about the virus and continues to do so, he said.

Critics also argue that the WHO was too slow to recommend travel restrictions and some other preventive measures, and also that the agency accepted information from the Chinese Communist Party at face value, despite red flags, including reports of arrests and silencing of whistleblowers.

“The review is going to be all encompassing, get into all manners of management operation questions,” acting administrator of the U.S. Agency for International Development John Barsa told reporters on April 22, speaking about the investigation. “There’s numerous questions in terms of the management of the WHO; how they have been operating holding member states accountable in their actions.”

WHO Director-General Tedros Adhanom Ghebreyesus told reporters in Geneva around the same time that the agency raised an alarm to countries around the world at the right time.

“Looking back, I think we declared the emergency at the right time, and when the world had enough time to respond,” Ghebreyesus said. “There were only 82 cases and no deaths [outside China],” including a few in Europe and none in Africa.

“A pneumonia of unknown cause detected in Wuhan, China, was first reported to the WHO Country Office in China on Dec. 31, 2019,” the WHO noted in a timeline summary on its website, adding, “The outbreak was declared a Public Health Emergency of International Concern on Jan. 30, 2020.”

The United States is the biggest single donor to the WHO. Prior to announcing a freeze on funding, the State Department planned to provide the agency $893 million in the current two-year funding period, according to Fox News.

Pompeo recently said the United States might permanently end its funding of the agency.