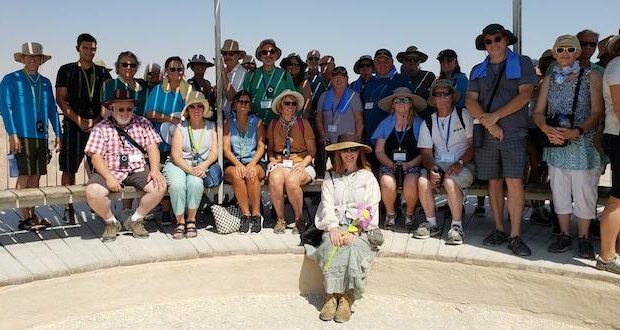 Metro Voice led a tour of 32 guests to the Holy Land in 2019 and continues to organize yearly tours.

Evangelical support for the nation of Israel is not as unified as it once was. The Jewish Connection: Evangelicals and Israel, a study of 1,000 American evangelical Protestants. reveals that 51 percent of evangelicals believe the Bible’s statements that Jews are God’s chosen people. However, the other half do not believe scripture.

“Older evangelicals and those who are charismatic or Pentecostal are the most likely to believe the Jews are God’s chosen people,” said Mark Dreistadt, president of Infinity Concepts, which conducted the study along with Grey Matter Research. “Also, evangelicals who read the Bible at least weekly are significantly more likely to believe this than are infrequent Bible readers.”

JOIN US: Metro Voice is taking our readers to the Holy Land in March 2022

The study also asked evangelicals what priority supporting Israel and the Jewish people is in their personal giving. On a five-point scale, 29 percent assign it the highest priority (5); another 19 percent rate it a 4. A total of 48 percent who rate this as a high priority (4 or 5). Only 21 percent consider this a low priority (1 or 2). Therefore, more than twice as many evangelicals consider supporting Israel and the Jewish people a higher priority (4 or 5) than consider it a lower priority (1 or 2).

TOUR THE HOLY LAND: Metro Voice is taking our readers to Israel in March of 2022. LEARN MORE!

Two out of ten evangelicals can be considered “Israel loyalists” — they believe Jews have been and continue to be God’s chosen people and put the highest priority on supporting Israel and the Jewish people. However, there is little agreement on how they most want to support Israel. A key finding is that just 11 percent of evangelicals prioritize supporting pro-Israel politicians or political positions in the United States. The vast majority would rather prioritize helping the needy in Israel, teaching the Jewish roots of Christianity, helping Jews return to their homeland or other types of non-political causes.

Ron Sellers, president of Grey Matter Research, noted that this research provides a clearer picture of evangelicals and Israel.

“The stereotype tends to be that evangelicals are staunch supporters of Israel who view things mostly through a political lens,” he said. “So much previous research focusing on geopolitical issues contributed to this stereotype. We wanted to examine this from a theological and charitable standpoint, and found the political angle is rarely where evangelicals focus their priorities. Evangelicals are also far from unified in their theology related to Israel and the Jewish people.”

Israel and the Jewish people are regularly vilified by Hollywood, the media and leftist politicians. Support generally declines among the public after decidedly one-sided and negative reports of how Israel responds to Palestinian terrorist attacks from Hamas-controlled Gaza.

According to MEMRI, the Middle East Media Research Institute,  Palestinian groups, including terror-related organizations, have well-funded social media efforts which pour tens of millions of dollars into campaigns attacking Israel and Jews. Those false and often threatening attacks are often spread by Facebook, Twitter and other platforms and then make their way into mainstream media which does not question the sources.