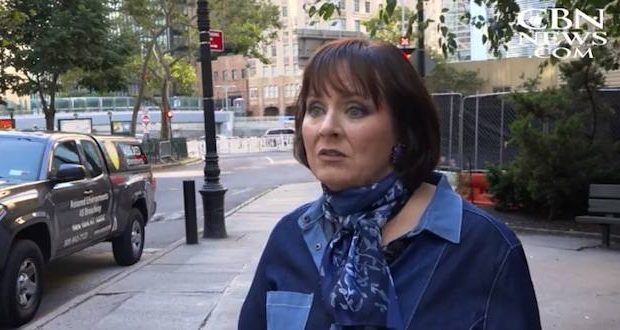 GROUND ZERO, NEW YORK CITY – Most of us remember where we were when terrorists rammed jets into the World Trade Center towers 18 years ago. More than 3,000 died on 9/11, and the toxins left behind continue to kill many more.

In the midst of all the suffering, some survivors have found a new walk with God. Like Christina and Brian Stanton. In her new book – Out of the Shadow of 9/11: an Inspiring Tale of Escape and Transformation (see book and link below article) – Christina shares a very personal story. 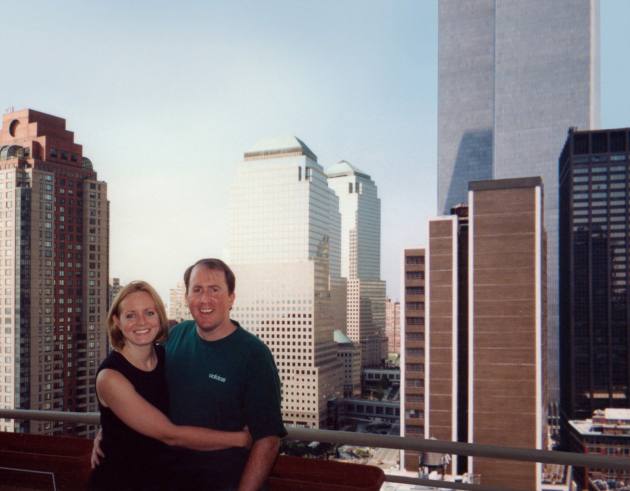 Christina and husband Brian on the terrace of their apartment overlooking the World Trade Center.

‘A Bomb Went Off’

She begins by describing how Brian shook her awake that 9/11 morning up on the 24th floor of their apartment building just a few hundred yards south of the Twin Towers. 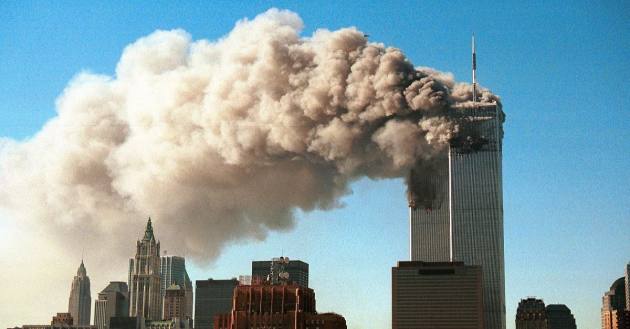 “He said a bomb went off at the World Trade Center,” Christina shares. “So we rushed to our terrace and we were just in shock.”

They could see smoke and flames pouring from the top floors of the North Tower.

Then roaring up behind them, the second airliner flew just over their heads on its way to crashing into the South Tower.

Blew Them Off Their feet, Knocked Them Out

“It went right in front of us, turned and then shot in,” Christina recalled. “And the shockwaves from the plane blasting into that building actually blew us back into our apartment.”

They were both knocked out, but awoke a few minutes later and rushed away from the Twin Towers towards Battery Park and the southern tip of Manhattan, joining throngs of panicked runners.

READ: Why the 9/11 Memorial Matters

“Some people were bloodied. Other people were in pajamas just like myself,” Christina said. She’d fled so fast, she hadn’t had time to get dressed or even put on shoes.

And it was shoes that presented the Stantons with one of the oddest sights they saw that day. As they’d run south along the West Side Highway, Christina recalls, “There were shoes all over the road…all kind of random shoes. And I remember looking down, thinking ‘Why are all these shoes here?'”

People were apparently so discombobulated by what was happening just a few blocks north of them at the World Trade Center, they were running right out of their shoes, or were taking them off to run faster and dropping them as they sprinted.

The Stantons reached Battery Park where chaos reigned, especially when the booming sound of the first Tower collapsing hit the throng there.

“Everybody realized all at once that one of the Towers was coming down. And everybody started going crazy,” Christina said.

People in Battery Park had a good reason to panic. Because the Twin Towers were so tall, if they had fallen over rather than pancaked as they collapsed, they could have reached all the way to Battery Park and crushed people by the thousands. 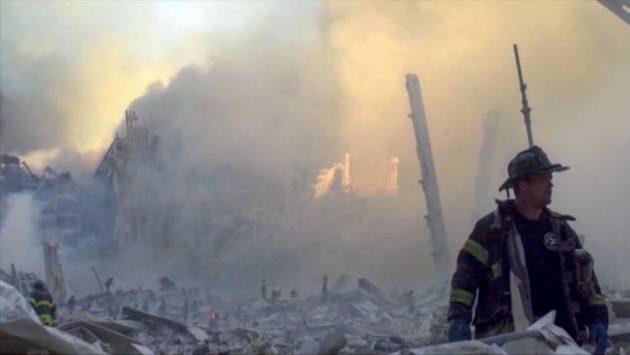 Then choking smoke billowed out from Ground Zero and coated the Stantons and everyone around them in yellow sticky grime.

“Everyone was caught up in the smoke and were, I’m sure, worried they were going to be asphyxiated.”

That only increased the panic. Standing now in this park where tourists queue up to ferry over to the Statue of Liberty, Christina recalled what she saw that 9/11 day.

“Everyone’s running around screeching and bumping into each other and catapulting over things,” she described. “And I just remember looking at Brian and saying ‘Are we going to die?'”

Afraid of being trampled, they quickly hid behind a big brick round fort that New York built to protect itself from the British in the War of 1812.

There the Christian couple said goodbye to each other and began to pray.

Christina expressed how grateful she was she’d been able to meet and marry the man of her dreams just a year-and-a-half before, and was glad she could be with him as they faced death.

‘Sorry that I’ve Not Put You First in my Life’

But then she began to add up how she’d lived her life and what her goals and ambitions had been, and that’s when it hit Christina how shallow her walk with God was.

“At that moment, it totally didn’t matter that I hadn’t achieved my Broadway dreams or hadn’t gotten a penthouse. It was all chasing after the wind,” she stated. “And why didn’t I have a close relationship with God at this point? When the only thing that mattered was that, I didn’t really have it.”

She recalled praying, “‘Lord, I’m sorry that I have not put You first in my life.’ Because I hadn’t. I was a Sunday Christian.”

As for all those panicking people around them, many ran to the shore that surrounded Battery Park on three sides and began screaming at boats and ships passing by. Many threw themselves into the water.

Largest Evacuation by Boat in History

Then the Coast Guard issued a call for help and boats by the hundreds began to race over to the Manhattan shoreline and evacuate those trapped multitudes.

“This ended up being the largest boat evacuation in history,” Christina stated. “Boats picked up 500,000 people from Manhattan that day.”

The Stantons raced to a railing some six to nine feet above the water when a small boat came for them.

The boat’s deck was way below her, and Christina said, “I remember balancing myself on this railing and two guys kind of lifted me up and chucked me into the boat.”

The Stantons spent many days depending on the kindness of friends and loved ones to put them up before they were allowed back into their apartment, where they’d left the terrace doors wide open facing Ground Zero.

“It was this huge, full-on trash receptacle,” Christina recalled. “Everything was covered with about six inches of yellow dust. There were papers everywhere.”

Even after they cleaned all that yellow dust out, the Stantons woke every morning to a whole new layer of it covering everything in their apartment for months.

Those who’d fled were told this omnipresent dust was safe, but it turned out to contain some 2,000 toxins.

“It was ‘toxic soup.’ There was everything from pulverized concrete to jet fuel to asbestos,” Christina stated. “There were wood products that were finely ground. There were human remains.”

The city re-built this area around Ground Zero, but Christina and Brian – like many other New Yorkers – were out of work, unsure how to move forward, suffering from that poison coating their apartment every day, and going through post-traumatic stress.

“We ended up going to counseling over it, actually for several years,” Christina said of that PTSD. As for all those toxins they breathed, Christina watched them kill the Stantons’ beloved dog and believes they will likely kill Brian and Christina years before they would otherwise die.

Finding God in the Shadow of 9/11’s Satanic Act

Yet out of all this darkness around Ground Zero came a guiding light. The terrorists were shouting “God is Great!” as they crashed into the Twin Towers. But what they were really doing was a horrific act for Satan. Still, even in that horror, the One True God was able to bring good.

In the case of the Stantons, having stared death in the face where the Towers once stood, they now realized they wanted a real relationship with the God of life and were totally dependent on Him for their future. They repented of their past.

“I’d let Jesus out of a box on a Sunday and then I’d go back to my life on the weekdays. Pretty much everything I was doing was all chasing after a whim,” Christina confessed. “It was just the realization that I’d been living my life really without God.”

In her book, Christina tells how God then moved to set their future. It started with Christina reluctantly reaching out for help from Reverend Tim Keller’s famous Redeemer Presbyterian Church in Manhattan.

“I went to the church and they covered some bills for us, and we started attending there,” Christina recalled. “Not too long after, I got a job there – in Redeemer’s church-planting center – and then my husband got a job there as an office manager.”

The Stantons saw and felt suffering during and after the attacks on this ground where the Towers fell, and God’s not letting that personal experience go to waste.

“Our whole lives are changed because of 9/11. It certainly deepened our relationship with Christ,” Christina insisted, summing up, “The only thing that matters now is glorifying God and to help others in a hurting world.”

Metro Voice is an Amazon Affiliate. Check out Christina’s book below. When you do, you help us continue our mission of truthful journalism.

Previous: ‘We were targeted”: Senators confront Facebook over pro-life censorship
Next: Samaritan’s Purse responds to Dorian by building an entire hospital