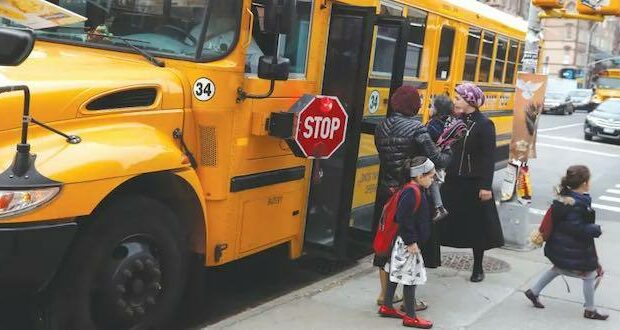 Jewish Children in Chicago are recovering emotionally after four men impersonating Nazis stormed their school bus last week. The bus was packed with Jewish kids and has shocked both parents and Jewish groups across the nation.

The driver, who was dropping the children home from an Orthodox Jewish day school in the city’s West Rogers Park neighborhood, eventually succeeded in forcing the men off the bus.

Alison Pure Slovin, midwest director of Jewish rights group the Simon Wiesenthal Center, said she was shaken over the incident.

The group has been in close contact with the parents of the children, as well as with the Chicago Police Department, and urged anyone with information to step forward.

“This shocking incident took place on the anniversary of Kristallnacht, the Nazi pogrom that destroyed almost all synagogues across Germany in 1938. Many members of the Jewish community have family who lived through those horrors,” Slovin noted.

The men shouted antisemitic slurs did the Nazi salute, terrorizing the children who were s young as four years old.

“The Chicago Commission on Human Relations reported that hate crimes targeting Jews are up 75% in the city of Chicago. But for our community, it is not just statistics but the fear and anger such incidents generate,” Slovin said.

Members of the Chicago’s City Council recently passed a resolution reaffirming their commitment to protecting the Jewish community as antisemitism is on the rise.

According to the Israeli-American Council (IAC) there has been a dramatic increase of complaints filed on behalf of Jewish children on antisemitism in schools.

The IAC launched School Watch, an initiative it says is designed to “contribute to a safe school environment and reduce incidents of antisemitism, anti-Zionism, national origin discrimination and hate.”

“I cannot remember the last time that there were so many cases of teenagers using the word ‘Hitler’ in American public schools,” Nicolet told the paper.

Previous: Remove abortion and women still have other choices, including adoption
Next: Drop-off sites to open for Operation Christmas Child