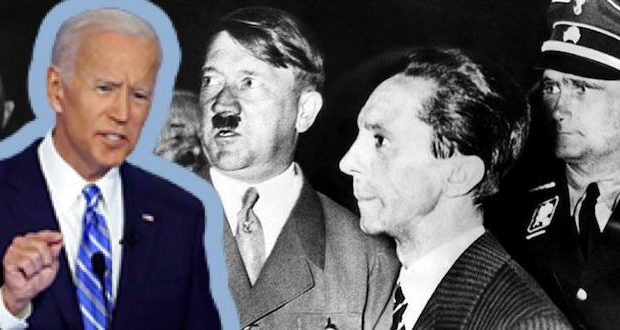 “The rule in debate is that if your only argument is to call your opponent a Nazi, you have no argument at all. Instead of engaging in debate on policy, Joe Biden has descended to name-calling and Holocaust references,” the Jewish Coalition said in a statement. Its calls are being echoed by other Jewish groups across the nation.

During an interview with MSNBC, Biden was asked how he would respond to Trump claiming that the former vice president is pushing a socialist agenda. Biden said Trump is “sort of like Goebbels.”

Joseph Goebbels was a Nazi propagandist who contributed to the deaths of over 6 million Jews.

The Republican Jewish Coalition has endorsed Trump for president and is backing Republicans in key battleground states.

“There is no place in political discourse for Holocaust imagery or comparing candidates to Nazis. It’s offensive and it demeans the memory of the Holocaust, the suffering of the victims, and the lessons we must learn from that terribly dark chapter of history. Joe Biden has been in politics long enough to know this,” the coalition said. “We call on Joe Biden to retract and apologize for that egregious comment.”

The Biden campaign did not immediately respond to a request for comment.

In the MSNBC interview, Biden then went on to compare Trump to communist dictator Fidel Castro.

“I think people see very clearly the difference between me and Donald Trump,” Biden said. “Trump is clearing protests in front of the White House that are peaceful, you know, with the military. This guy is more Castro than Churchill.”

Trump did not order the clearing of the protesters in front of the White House, according to Attorney General William Barr. The protesters had injured 150 law enforcement officers before the crowd was pushed back to create a safety perimeter around the White House.

Trump and Biden are scheduled to face each other during the first of three presidential debates on Tuesday evening.

Trump has repeatedly compared the recent leftward shift of the Democrat Party to socialism.

During a crowded Democratic primary, Biden shifted his platform far to the left in order to appeal to the growing progressive wing of the party. Ahead of the Democratic National Convention, the former vice president merged his policy platform with that of self-described socialist Sen. Bernie Sanders (I-Vt.).

The so-called “Unity Platform” did not mention the key socialist proposals by Sanders like Medicare for All and the Green New Deal, but accomplishes those goals through more subtle wording.

Previous: Prayer echoes through Washington as march and rally fills National Mall
Next: Can baptism forgive your sins?