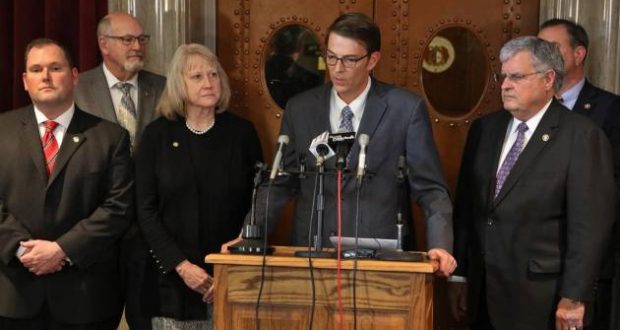 Republican House members hold a press conference after the report was released.

Just moments after a bi-partisan report was released on allegations against Gov. Eric Greitens, the governor held a 30-minute press conference blasting it.

Greitens notes the committee held its meetings behind closed doors, where his representatives and the news media could not attend.

She calls the governor’s comments “an absolute disgrace.”

“After taking a little time to process the initial committee report and then listening to the governor’s comments, it is clear to me that this governor must resign and if he fails to do so, I believe we should begin impeachment proceedings,” says Beatty.

Statewide, voters remain divided on what Greitens should do and the polling organization believes voters are “likely waiting to see as more facts emerge.”

His job approval rating remains high with Republicans and Independents while he’s flirting with single digits among Democrats.  63% of GOP voters back Greitens, although 20% disapprove.

Statewide, roughly 48% feel Greitens should resign, while 36% say he should not and 16% are not sure.

Greitens is charged with felony invasion of privacy for allegedly photographing his mistress in a state of undress and then threatening to distribute the photo if she told others about their relationship.  He also faces legal challenges on several other fronts. The woman recently testified she may have dreamed up the key evidence and prosecutors have yet to produce evidence that could convict the governor of the charges.

Speaker Todd Richardson, R-Poplar Bluff, tells the Capitol Press Corps the committee’s job was not to make their own conclusions, but to hear testimony and judge the credibility of witnesses.

All seven members of the committee, five Republicans and two Democrats, signed the report.

“Let me be very clear about this: this is not a witch hunt, and the committee had no political agenda,” Richardson says.

“The committee’s task, and its only task, was to conduct the fairest, the most thorough and timely investigation possible,” says Richardson.

The Speaker says the committee will be unable to make recommendations to the Legislature before the 2018 session ends on May 18.

“With the limited time left for the General Assembly to complete the work Missourians sent us to Jefferson City to do, Chairman (Jay) Barnes and the members of the committee have work remaining,” Richardson says.

It would take a three-fourths majority of both the Missouri House and Senate to call themselves into a special session.

Richardson says the testimony “outlined in the report is beyond disturbing.”

Greitens notes the committee held its meetings behind closed doors, where his representatives and the news media could not attend.

Speaker Richardson says the report does not pass judgment on Greitens’ guilt or innocence in the St. Louis case, adding that’s for the courts and a jury to decide.

A St. Louis City grand jury has indicted Greitens for one felony count of invasion of privacy, and his jury trial is scheduled to begin on May 14th in downtown St. Louis.

Greitens’ lawyer, former U.S. Attorney Edward Dowd, has said that the release of any report before the May trial date in St. Louis would impact Greitens’ ability to obtain a fair trial.

Greitens continues to contend the indictment is politically motivated as the actions did not occur while he was governor.

Political observers have noted the connections between those involved in the prosecution and it’s witnesses having ties to political operatives of the Democrat party.