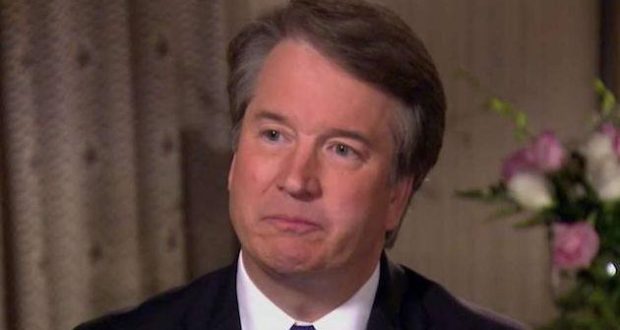 Close to tears at times, Brett Kavanaugh defended his character as a young man saying he was a virgin for many years after college.

‘I was a virgin’ Kavanaugh admission rocks allegations

The first broke Monday night as Kavanaugh, who received the highest rating ever for personal character from the American Bar Association (A++) defended himself against the sexual assault allegations roiling his nomination. Close to tears it seemed at times,  the widely respected judge opened up and shared he was a virgin through high school and “many years” after.

“We’re talking about an allegation of sexual assault,” Kavanaugh said during his interview on Fox News Channel’s “The Story with Martha MacCallum.”

“I’ve never sexually assaulted anyone,” Kavanaugh said confidently. “I did not have sexual intercourse or anything close to sexual intercourse in high school or for many years thereafter … The girls from the schools I went to, and I, were friends.”

“Through all these years that were in question, you were a virgin?” Fox News host Martha MacCallum asked.

“That’s correct,” Kavanaugh replied, adding that he did not have sex until “many years after.”

Neither of the two accusations regarding Kavanaugh involve sexual intercourse. Christine Blasey Ford is alleging Kavanaugh held her down and groped her over her clothes during a high school party in 1982, and Deborah Ramirez claims he exposed himself without her consent during a gathering at Yale University their first year in college.

The Fox News show was one of the most highly watched news television news episodes in recent years.

At another point in the interview, Kavanaugh vowed he is “not going anywhere” despite the allegations.

“I’m not going to let false accusations drive us out of this process,” he said, sitting beside his wife as she nodded.

Kavanaugh during the interview denied attending the party in Ford’s account.

Ford has stated that she is sure Kavanaugh was the man who allegedly assaulted her in an episode that she says has caused her decades of emotional trauma.

The second admission came from a fourth person, named as a witness by Kavanaugh’s accuser Christine Ford, has denied any knowledge of the incident saying it never happened.

Leland Keyser, originally identified as one of five people at the party where Ford claims this incident occurred, has said it never happened.

At this point, Judge Kavanaugh – and all who were alleged to be present during the supposed incident – deny this claim.

As reported by the New York Times:

This is very significant.  One of the discrepancies in Ford’s story — setting aside her inability to name the scene of the alleged assault, or even the month in 1982 in which it supposedly took place — involves the number of people at the party, and the number of people involved in the claimed attack.  She says two boys were in the room (including Kavanaugh), but her therapist’s notes from 2012 (the first time she spoke about the incident) say that four boys were in the room. According to the Washington Post, Ford chalks this inconsistency up to a misunderstanding by her therapist, asserting that there were four boys at the party, not in the room.  In her original letter to Sen. Feinstein, which the California Democrat sat on for roughly two months, Ford says there five total people at the party, including her.  Having heard from Kavanaugh, Mark Judge, PJ Smyth, and the accuser, there was only one named witness who remained publicly unaccounted for.  Until now.  It turns out that this last witness was not a fourth boy, but a girl named Leland Ingham Keyser.  That fact unto itself is another shift in Ford’s official story.  But that’s not all:

[Keyser] is now executive producer of Bob Beckel’s podcast. Keyser is the ex-wife of Beckel, a former Democratic operative and commentator. A search on OpenSecrets.org reveals Keyser’s only political donation has been to former Democratic senator Byron Dorgan. Keyser’s denial, as a female lifelong friend and Ford’s last named witness, is the most consequential development that has occurred since Ford publicly stepped forward last Sunday and detailed her allegations to the Washington Post. Ford’s allegation of the 1982 incident was told to no one until a 2012 therapy session, when Kavanaugh was first touted in the media as the most likely GOP Supreme Court nominee. All of Ford’s named witnesses of the party, both male and female, have now denied any recollection of attending such a party.

This final named witness is a female, a Democrat, and a longtime friend of the accuser. She states outright not only that she doesn’t recall attending this particular alleged party, but that she never knew Kavanaugh and was never at any party with him, as far as she can recall.  So of the five people Ford places at this party 36 years ago, she is the only one who says it even took place.  The other four have contradicted or rejected her memory of it, to varying degrees.”

The allegations, which to this point have had no facts or witnesses to back them up, may be destroying the slim lead Democrats had over Republicans going into the election.

Political pundits questioned the timing of the allegations, having come out just after what observers said was a stellar three days of testimony of Kavanaugh to the nominating committee.

Now, with public opinion turning against the accuser and Democrats for lack of any substantiating evidence, a poll released Monday by the Gallup Organization, showed Republicans having the highest favorability rating since the early days of the Obama administration.

Republicans now lead Democrats in polling of the middle class, men, and other demographics – the same groups that gave Donald Trump his surprising victory in 2016.

It is not clear if Democrats will continue to push the allegations against Kavanaugh, having seen their strategy to hold off on releasing the information until just before the mid-terms having possibly backfired.