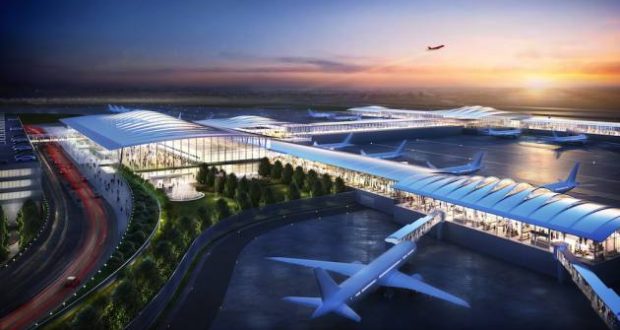 As the finishing touches are put to the design for Kanas City’s International Airport, officials want to hear from area residents beginning today and running for the next week. You’ll have the opportunity to give your feed back, good and bad, on the $1.4 billion airport.

Currently, KCI is quite simple, travelers get dropped off, walk through the doors and are practically at the gate.

But, when it comes to the aesthetics and amenities and security today, travelers are left wanting.

The problem? Security at every gate grouping. It’s a plan designed in the late 50s and early 60s when security was much lighter and passengers much fewer. The new plan has one security area which allows passengers to roam the airport. It provides easier boarding because of less crowded waiting areas and more options for travelers.

While some things are being added, others are being dropped. The new KCI planned to feature at two-story fountain at its entrance to reflect Kansas City as the “city of fountains”. But, designers decided that was not efficient.

After making several other changes to their plans, the new KCI will be a bit more expensive and bigger than originally expected. So popular was the new design and the belief that it would bring in new passengers, airlines servicing Kansas City offered to pay more money so they could have more gates. All of the cost of the new gates is being funded by the airlines.

Officials also changed the projects timeline. They now would like to start construction early in 2019, with the airport opening in late 2022.

But, for all these things to happen, the design team and the Aviation Department want to hear from those who will use the airport.

They will hold seven open houses to gather design feedback from the community and travelers and will answer questions about the project.